A look at the coronavirus pandemic in Estonia

It's concerning to see the coronavirus infection rate steadily on the rise again in Estonia. During recent weeks there have been multiple deaths each day and hospitals are feeling the strain of trying to find additional intensive care beds. There still appears to be some resistance towards wearing masks in public and being vaccinated in Estonia despite the success seen in other countries (e.g. Germany). Only 55% of the Estonian population are fully vaccinated yet the vaccine has been freely available for some time now. Whether it's fear, lack of knowledge or ignorance that affects their judgement, the fact of the matter is, vaccination saves lives and significantly reduces the chance of ending up in intensive care if you contract COVID-19. As of today 1,461 people have died in Estonia after contracting the virus, two of the youngest victims were an eleven year-old girl who died in March and a newborn. In the last 24 hours Estonia has lost seven more senior Estonian citizens.

When I visited Estonia in August I was amazed to find the majority of people I passed in shopping centres and restuarants were not wearing masks and adhering to the two metre social distancing rule. People appeared unconcerned that a deadly virus was lurking and did little or nothing to protect themselves. We have been living with this pandemic for almost two years now and have seen the death toll, it's nearing five million worldwide now. The count is updated everyday, country by country, on worldometer: covid live update. Just because we are tired of the situation and the restrictions placed upon our lives, it doesn't mean we should stop being viligant. The virus is still here and until we have reached herd immunity we should all be wearing masks in all indoor areas and keeping a safe distance. 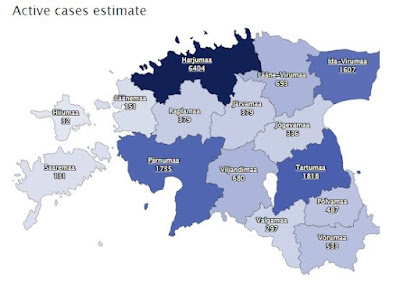 There are estimated to be 15,510 active cases in Estonia.
Most of the cases are in Harju, Tartu, Pärnu, Viljandi and Võru counties. 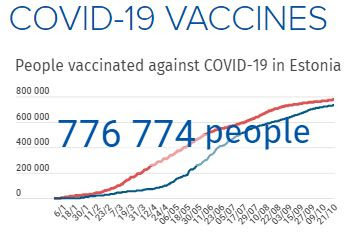 Estonia is using the Pfizer BioNTech, Moderna and Janssen vaccines.
AstraZenca is being used for the over 50s.
It is not get fully known how long immunity lasts after vaccination, there are multiple ways of determining immunity level including but not limited to antibody levels, therefore some experts recommend booster shots. 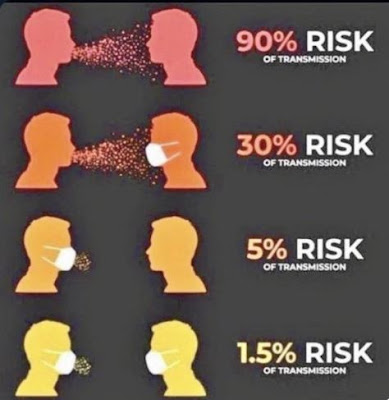 Why wearing masks is important.
A crisis phone line has been created to answer any coronavirus-related questions and for psychological first aid. The free number to call is 1247 (wíthin Estonia).
Posted by Tania Lestal

Peeter Simm's film Vee Peal is up for consideration for Best Foreign Language Film at the upcoming Oscars. Vee Peal (On the Water) is a coming of age film set during the Soviet occupation and is based on the book with the same name.
Posted by Tania Lestal

Researchers from the University of Tartu have developed a way of making sodium-ion batteries from peat.
Posted by Tania Lestal

Today we say farewell to Kersti Kaljulaid as President of Estonia and welcome Alar Karis who was sworn into office today. Kaljulaid served five years as Head of State, she was the country's first female president. Alar Karis is a former University of Tartu rector, auditor general and head of the Estonian National Museum. I wish him every success. 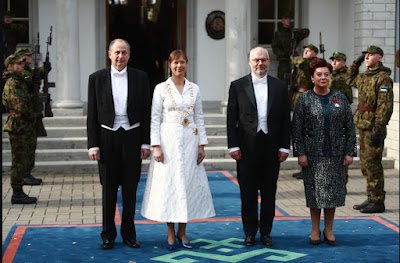 There are approximately 1.1 million people who speak Estonian as their native language. Around 922,000 of them live in Estonia and another 160,000 can be found scattered throughout the world. Estonian is a southern Finic language, most similar to Finnish and has been influenced by German over the centuries. Estonian is a beautiful sounding language, often difficult for English speakers to learn but once you become familiar with its 14 grammatical cases and unique vowel sounds (Õ,Ä,Ö,Ü) all you need to do is practice, practice, practice.
Posted by Tania Lestal

The third Worldwide Estonian Language Week will take place from 4 -10 October 2021. Language enthusiasts are encouraged to participate via the KeelEST website to increase their knowledge of the Estonian language. Many tutorials, games and quizzes can be found on the website. 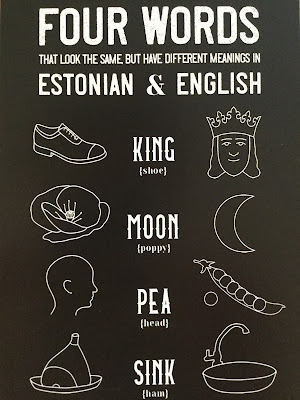 Why not test yourself? More information about Estonian Language Week can be found here.

Few countries in Europe can boast they have over 2,000 islands but Estonia is one of them.  Northern Europe is home to many islands, Sweden and Norway have the most (over 200,000 each) and over the centuries Coastal Swedes have had their influence in Estonia. Not all of Estonia's islands are inhabitable, but those with populations are unique in their own way and offer respite to those who want to get away from it all.

Hiiumaa is Estonia's second largest island. It has an area of 989 km2 and is 23 km from the Estonian mainland. According to the latest statistics, 9,381 people live on the island of Hiiumaa in one of its 185 settlements. 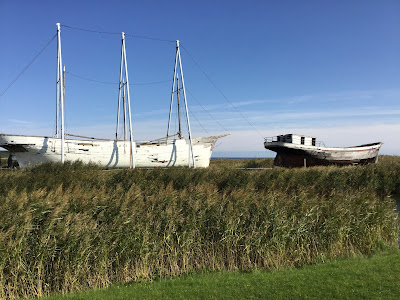 Port of Sõru.
This year I decided to include Hiiumaa in my summer holiday to Estonia as I had never been there before and was eager to explore the island first-hand. 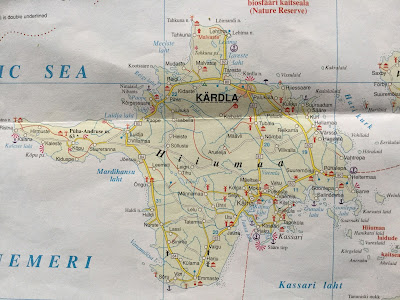 Map of Hiiumaa
After I left the Estonian mainland at Rohuküla I crossed the Baltic Sea by ferry and arrived at the Port of Heltermaa. I then travelled on to Lassi where I stayed in a quaint countryhouse for the next four nights. Prior to arriving I was told that Hiiumaa's water contains high levels of iron and is unpleasant to taste, therefore I was advised to drink bottled water. Each day I explored different parts of the island. 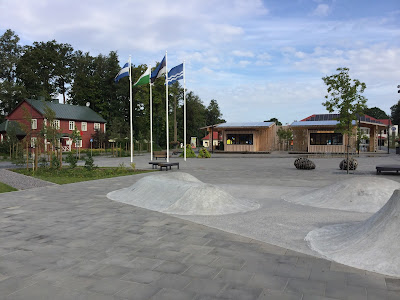 Kärdla centre
25km from Heltermaa Harbour is Hiiumaa's largest settlement and only town - Kärdla. It was smaller than I expected; it had a supermarket, post office and a small selection of cafes, restaurants and other shops. It's a quiet place with few people around before 10am. 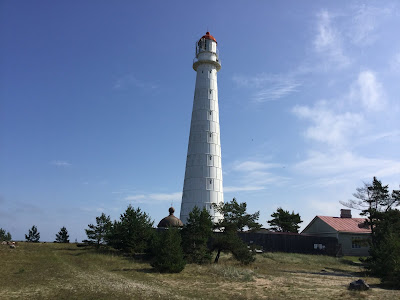 Tahkuna Lighthouse
But you don't visit Hiiumaa for the shops, it's all about nature. Being outdoors and exploring new places. Hiiumaa is surrounded by coastline and sometimes you might find yourself deep in a forest, then shortly afterwards near a picturesque harbour. Such beautiful contrasts. Hiiumaa is also home to many famous lighthouses, Tahkuna Lighthouse is the tallest in Estonia standing at 427m above sea level. 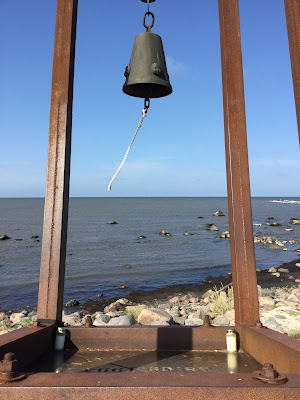 The memorial to the victims of the MS Estonia disaster.
Also located at Tahkuna is the memorial dedicated to the children who died onboard the 'Estonia' in 1994. The bronze bell rings out to sea during strong winds. 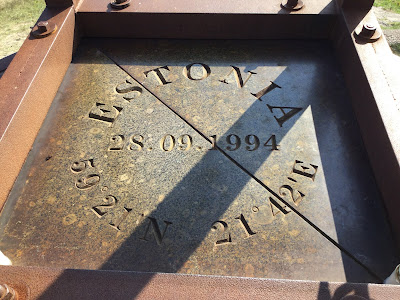 The incline of the monument has a visual and emotional impact, intended to call to mind the last moments of the ship. 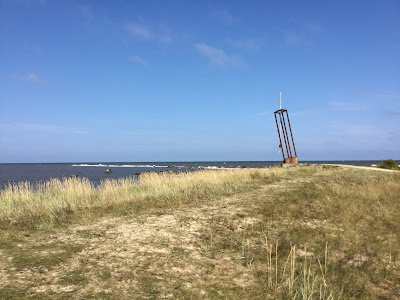 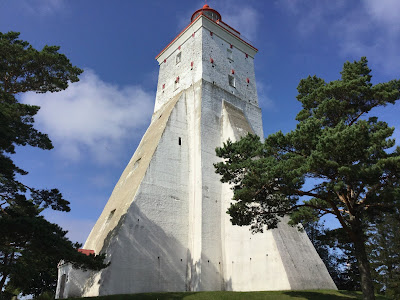 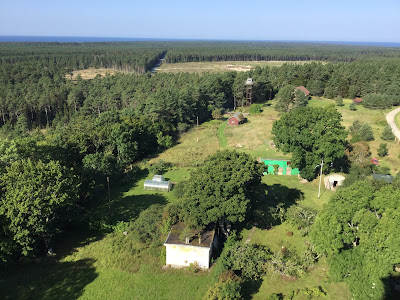 View from the top of Kõpu Lighthouse. 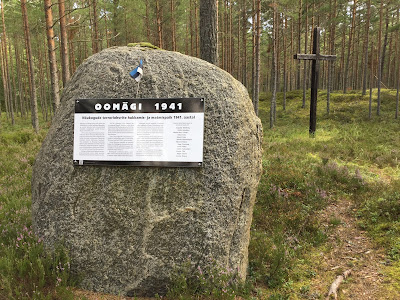 I came across this memorial by chance when I took a wrong turn in search of the Hill of Crosses. This momument is dedicated to the Estonians who were murdered here during the occupation in 1941.  I felt sad when I saw this, not only for the victims but because my own great-grandfather was murdered in a forest (Albu) in 1941 along with four other men. The exact location of their executions has never been revealed therefore it is impossible for me to lay a cross in their memory. 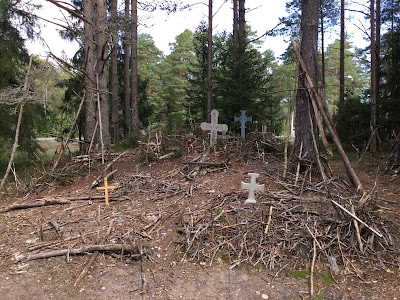 Hill of Crosses
In the forest bordering Reigi and Puhalepa parishes lies the Hill of Crosses. In the 1700s a cruel landowner banished 500 Swedes from Hiiumaa and had them sent to Ukraine. Before they left, each placed a cross here to mark their departure. Today, people still come and leave crosses, there are hundred of them scattered throughout the forest. This forest is also full of different types of mushrooms and it was here that I found my first death cap. 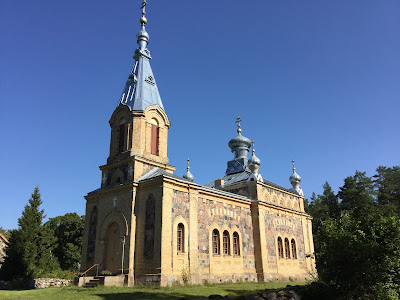 Russian Orthodox Church
This is the only Russian Orthodox church on the island and is an attractive building surrounded by a stone wall. I would have liked to have gone inside but unfortunately it was closed. Very often when I visit churches and cemeteries in Estonia, I find frogs there. This time I did too. 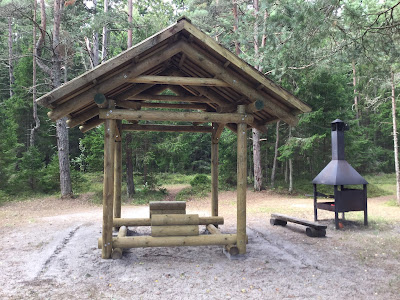 Hiiumaa is a wonderful place to visit if you enjoy the outdoors. There are many harbours, beaches, and forests to explore that you don't have to share with too many other people. Life is very relaxed here, the perfect environment for nature lovers who enjoy hiking and camping. 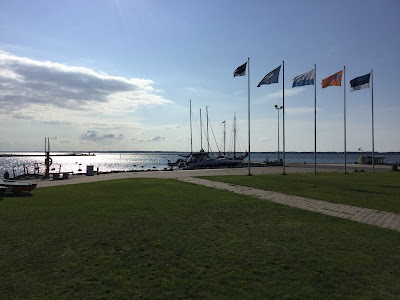 During my four days in Hiiumaa I visited every lighthouse, peninsula and key attraction. Of all the things I experienced, perhaps my favourite was the simple pleasure of watching the sunset over the water.  Regrettably I didn't take any photos of this - but there is always next time!
Posted by Tania Lestal