MS Estonia | The story of her sinking

The sinking of MS Estonia on the 28th of September 1994 was one of the worst maritime disasters of the 20th century. The ship sank in the Baltic Sea on its way to Sweden. 852 lives lost It's a national tragedy that still haunts Estonia today..

On this day, 76 years ago, on 22 September 1944, the Red Army reentered Estonia beginning the Soviet occupation that would last almost half a century. Estonian resistance by those at home and in exile also began. It was a struggle endured until August 1991, when Estonia finally restored its independence.
Posted by Tania Lestal

In the autumn of 1944 tens of thousands of people fled Estonia trying to escape the advancing Soviet army. Sadly, not everyone made it to safety and an estimated 5000  Estonians lost their lives as they tried to reach Sweden. A new memorial was unveiled on Saturday in Lääne County dedicated to those who perished. 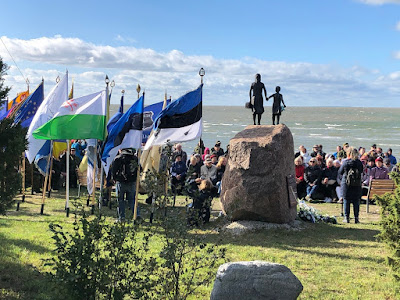 Rail Baltica set to connect Europe like never before

It's been a long time in the making but the last missing piece in the European railway system will finally become a reality with the creation of Rail Baltica. Set to open in 2026, Rail Baltica will be a new high speed train service that links all three of the Baltic States with the rest of Europe. The 870 km train track will see regular daily services between Tallinn, Riga, Vilnius and Warsaw where passengers can then change to connecting trains in Poland to reach other European cities. The cost of the project is estimated at 5.8 billion euros, less than the cost of the London Olympics in 2012. An additional underwater tunnel will be bulit between Tallinn and Helsinki that will connect Finland to the rail network. Currently the ferry journey between Tallinn to Helsinki takes 1h 40m - 2 hours but with the proposed FinEst Link, that time will be slashed to just 30 minutes with Rail Baltica. More information can be found here: Rail Baltica
Posted by Tania Lestal

Skandinaavia Vaikus (Silence of Scandinavia) is a 2019 psychological thriller directed by Martti Helde that focuses on the naturalness and silence inherent in Nordic people. The plot centres around the reunion of two siblings, Tom and Jenna, who a few years earlier, experienced a violent event. As they travel through the wintery countryside together Tom and Jenna are forced to deal with their unresolved past that then determines the future of both of them. Stars Reimo Sagor and Rea Lest.
Posted by Tania Lestal

A 71-year-old Estonian woman who got lost in the woods and collapsed in a ditch had her life saved by an elk. The creature lay next to her until someone came along to help. Two wildlife photographers spotted the elk, who then discovered the exhausted woman who had been missing for over a day. The incident took place near Paide. You can read the full story (in Estonian) on the Postimees website - https://leht.postimees.ee/7058061/poder-paastis-kraavi-kukkunud-proua
Posted by Tania Lestal

A team of ambitious and talented students from Estonia's top universities are working on a solution to target climate change by producing a solar car. They realised that lessening road traffic won't solve the problem but driving smarter will. Once built, the car will be tested in extreme conditions by racing 3000 km through the desert in Australia. The Estonian solar car will be entered into the Bridgestone World Solar Challenge, racing alongside creations from some of the world's best universities. The teams will travel all the way from the north coast to the south coast of Australia.

Solaride is a completely non-profit, student-run project, working to transform the transportation and renewable energy sectors in order to create a better future. They have the knowledge, but  don't have the resources. They need your help!
A fundraising campaign has been established on Hooandja to raise 20,000€ to build their engine.
More information can be found on the campaign page Solaride: A solar car for people

Sadly I didn't make it over to Estonia this summer. I took one short trip to Poland to visit my brother and while there we agreed to go to Estonia together next year! His girlfriend has never been so it's sure to be an exciting trip. Estonia is beautiful this time of year, I love spending time outdoors in nature, visiting markets, attending festivals and eating out of course. Some flavours you just can't get outside of Estonia. I miss delicious Estonian bread. To me, its the tastiest in the world! Until my next trip to Estonia, this video reminds me of some of the things to look forward to!