In Munich today the local Estonian community gathered for an early EV100 celebration. No doubt many of us will be in Tallinn next week for Estonia's official 100th birthday celebrations.  Unfortunately there is no Eesti Maja in Munich so most Estonian events take place at the Haus des Deutschen Ostens.

After the initial welcome we all sang the national anthem followed by a rather humorous speech from General Riho Terras, Commander of the Estonian Defence Forces. Whoever said Estonians don't have a sense of humour? They certainly do behinds closed doors! After a series of muscial performances we were all pleasantly surprised when President Kaljulaid made an apperance. I was speaking with a few Estonian friends at the time when I heard gasps in the crowd then turned to see the President in the room. There was so much excitement! 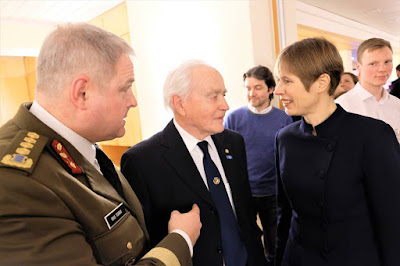 I knew President Kaljulaid was in town for the Munich Security Conference but I never expected to see her at our small gathering. It was so nice of her to stop by. Naturally I wanted to say hello so Karin, the head of the Estonian Society in Munich introduced us and we had quick chat. President Kaljuliad said she has relatives in Australia but has never been there. One day she would like to take a month off so she can. It was so nice meeting her, it made the celebration even more memorable!

My one big regret of the day - I forgot to bring my camera!