This is a very interesting article by ERR News. I for one still have many Estonian kroon banknotes and have no intension of ever cashing them in! Like my peers, I keep them in memory of the old days. 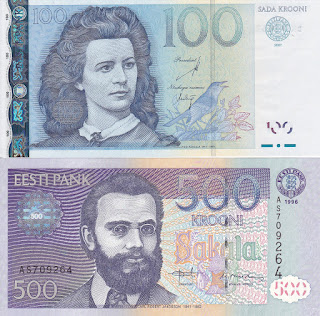 There are still tens of millions of euros worth of Kroons in Estonia and people cash them in every week, the Bank of Estonia said.

Although the euro has been in use in Estonia since January 1, 2011, not everyone has given up on the Estonian kroon, and there are estimated to be about 44 million worth of kroons in the country.

Margot Luukas, deputy head of the Cash and Infrastructure Department of Eesti Pank, said: "We still have 37.9 million kroons worth of banknotes and 6.7 million worth of coins in circulation at the end of the year."

The bank's museum still accepts kroons nine years after the introduction of the euro. Luukas said kroons are exchanged every day as people discover a stash of cash from a relative who has passed away or decide to swap their private collection.

"On average, we have six to 100 exchanges and the average value of one transaction is somewhere around 4,500 kroons," she said. "There have been larger sums where people did not know relatives had set aside their kroons. For example, they have been found among pieces of furniture during construction work."

If the average exchanged amount is 4,500 kroons, around €250-€300 euros, the highest amount the bank has exchanged after the euro was introduced was ten times higher.

"Our museum shop had the biggest deal of about half a million kroons. Last year, the largest amount of money exchanged was around 100,000 kroons," said Luukas.

Those who keep kroons at home in memory of the old days do not have to worry. They can continue to be exchanged at the 2011 exchange rate.