One of the joys of researching family history is unearthing long forgotten facts that have either personal or historical significance. This is the case with my fifth great-grandfather Johann Anton Beckert who was a chocolate maker from Bohemia. It is not known when Johann left Czech lands and settled in Estonia but he married his Estonian wife Margaretha Schumann in the Church of the Holy Ghost in Tallinn in 1784. 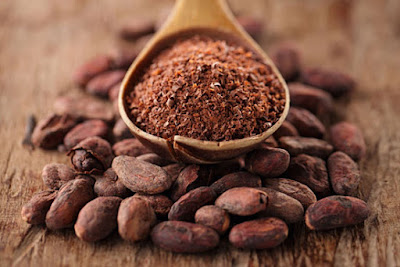 Johann and Margaretha Beckert had three sons who were all born in Tallinn. Johann Nicolaus Beckert was born in 1784, followed by Paul Peter Beckert in 1786 and Johann Gottfried Beckert in 1789. On the boys' birth registrations their father's occupation was listed as 'chocolate fabricant' / chocolate maker. If this is true, as the records suggest, then Johann Beckert would have been making chocolate in Tallinn 24 years earlier than Lorenz Caviezel, the man who is credited as being the first chocolate maker in Estonia. 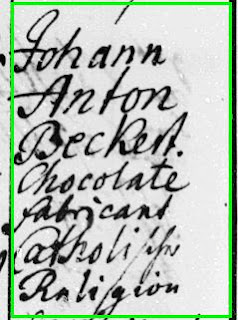 A brief history of chocolate in Estonia.
History books have recorded confectioner Lorenz Caviezel as being the first chocolate maker in Estonia. Caviezel was originally from Riga and opened his confectionery shop in 1806 at Langstrasse 16 in Tallinn (now known as Pikk Tänav 16) where Café Maiasmokk stands today. Caviezel moved back to Riga in 1835 and in 1864 the business was taken over by Georg Johann Stude who founded the Maiasmokk café. Today Kalev, the largest confectionery manufacturer in Estonia, owns the property where it keeps the tradition of chocolate making alive.

Unfortunately, I have been unable to locate further records about Johann Beckert and his chocolate making in Tallinn. Sadly he died young and unexpectly in April 1789 from typhoid fever. He had lost his wife and son Paul the previous month from the same illness. His two remaining sons grew up orphans. It is a tragic end to the man who might have given the residents of Tallinn their first taste of chocolate. I think I know who I got my sweet tooth from!