To mark the occassion of Halloween, the Visit Tallinn website has published a collection of eight ghost stories set in Tallinn. It's an interesting read for anyone fond of old tales. Enjoy! 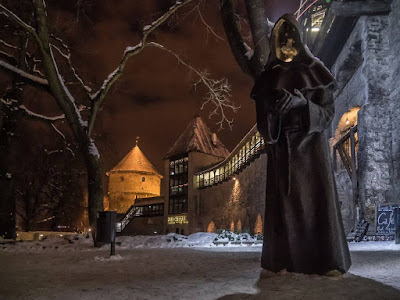 Let’s kick off with the most famous scary story in the old town - the fake window of Rataskaevu 16.

Once long ago the then owner of the house fell on hard times. Things were looking bad until a stranger came to him with an offer: allow the stranger to host a party in the upper left room of the house and in return there would be a bag of gold. The owner was more than happy and promised complete privacy. No one would even go up the stairs while the guests were there! The guests arrived and all went up to the little rented room, a lot more than the room should have been able to fit.

As the party upstairs progressed the owner got curious and snuck up to see what was happening. As he looked through the keyhole he saw a wedding in full swing. But his hair turned white with fright because everyone at the party was on hooves and with horns on their head and the beautifully decked out bride was accompanied by none other than the devil as the groom.

The owner ran down the stairs and hid the whole night. When morning came and the roosters called out then the whole party rushed out of the house and disappeared into the morning mist. By noon the owner was brave enough to go up to the room where he found his bag of gold only to have it turn to dung in front of him. No money for him. Ever since then the devil has a habit of using the room whenever he wants and so the following owners walled the whole thing in.

2. The Building of St Olaf's Church

St Olaf's is a beautiful towering church in Tallinn Old Town that by tradition must be the tallest building in Tallinn's skyline. Today St Olaf's is 123.7 m high but it was built to be even higher!

In 16 century during one of the rebuilding's of the church the spire of it was to become 159 m high. But where to find a builder mad enough to do it? The work was dangerous and city short on money. In all contracts the city made sure that money would only be paid if the tower was finished. Builders took up the challenge! But, oh misfortune, first one then second then third and all together seven master builders fell off the tower to their death. All of a sudden no one was willing to finish the church. It was cursed!

Along came a man who called himself Olav and promised to finish the tower. All he asked was thousand pieces of gold. All the money the city had left. Tallinn had no choice but to accept the bargain and Olav started to build. He did all the most dangerous work himself and built the spire as high as it was asked. Only one thing was missing - the golden rooster from the top of the tower. Olav himself climbed up under the eyes of the crowd gathered to see him finish his work.

As the final nail hammed in Olav slipped and fell off the tower. He landed amongst the people and all saw a snake and a toad crawl out of his mouth. Everyone called it the devil's work! Truly, the tower of St Olaf's is quite unfortunate, it has been struck by lightning many times and burned down to 123.7 m of height.

3. Horror of the Stable Tower

Many towers of the city wall also served one time or another as prison towers. One such tower is the Stable tower facing Toompea. Once there was a young man imprisoned in the tower for being dishonest in matters of love (cheated a girl out of a dowry, that bastard!). His family paid quite handsomely to have the boy's stay in the tower be as comfortable as possible. He had good food and wine, warm bed and even entertainment. Still the boy complained and begged to be taken to any other tower for his time in jail.

To calm the young man down his father sent a servant to keep him company at night. The servant ran screaming from the tower. Next his mother came to see what was going on. When she tried to stay the night she fainted from fear. After that the father spent a lot of gold to get his son moved to another jail and away from the unspeakable indescribable horror in the Stable tower.

This unassuming house is haunted by the Black Baron. Usually he is not seen, only the candle he carries walks around lighting the rooms. Doors unlock on their own and things go missing all the time here. The Baron though is not a nobleman at all but a goldsmith. Goldsmith of great skill who sold his jewellery both to upper and lower town. But he also practiced black magic and everything he made was cursed. People who wore what he had made died soon after. The goldsmith never found rest having cursed himself along with his works. Needless to say that one should never keep jewellery found lying around in this house.

This house is haunted by two ghosts: the Gray Lady and the Black Lady. Both thought to be Estonian girls and both had the rotten luck of having the attention of the von Uexküll family men. The Gray Lady was a maid in the house and she was beautiful. She got the attention of the lord of the house and was forced to become his lover. But soon he grew tired of her and killed her one night. He had her walled into the basement's wall but she might have been alive then still because now she appears in a gray dress and with long ragged nails as if she had tried to claw her way out of somewhere. She tries to strangle men sleeping alone and has a manic laugh.

The Black Lady was a girl from the countryside. She fell in love the lord's son and he with her. They were going to get married but for that she had to meet the family. The young man brought her to Tallinn and his family was very upset and unhappy. But there was no changing the young couple's mind. The wedding preparations went ahead and everything seemed fine until one morning the bride was missing. The groom looked far and wide but never found her. He should have looked real close though because she never left the house. His father killed her and buried her into the basement. Now she walks around in black looking for the lover that never came back.

6. The Monk in the Short-Leg Gate Tower

The Short-Leg Gate Tower and surrounding houses have a very persistent ghost. People have witnessed huge bloody faces on the walls, life size ships sailing through the houses, and most commonly a dark monk like figure, sometimes bloody and sometimes not, praying with a glowing cross on the wall. The monk can be quite violent if he wants. He brakes and hides things but also hits the living: an artist living here in the 1970s said that the monk would come some nights to pull his toes and also to kick him in the ribs.

Probably the name of the ghost is Justinius and he wasn't a monk at all. He was a novice set on becoming a monk and was killed in 1233 before he could repent for his sins. And sins he had many because before becoming a man of god Justinius was an executioner's apprentice. A job most disrespected and feared in Medieval society.

This house has very nice apartments that have some trouble finding a buyer. The reason is rather obvious. This used to be the KGB headquarters in Tallinn. How many people were tortured in the basements and how many were shot in the courtyard during the war will probably never be known but we do know that for thousands the road to Siberian prison camps started right here. When entering from the main door during the Soviet time they would joke: "Why is the doorknob worn down on the outside but not on the inside? Because, many go in but few come out."

Another case of good Estonian humour is the saying that the Pagari 1 house had the best view in the whole city, hell, the whole country. From its basement you could see straight into Siberia. It should then come as no surprise that the place is haunted and that one must have a rather cold heart to take up residence at this address.

8. The Knight on a White Horse

Not all ghosts are nicely tied down to one place. This knight in shining armour rides somewhere between Lasnamägi and the sea. The horse is white and the knight always polite and he stops those passing by. He offers to sell them skins.

Behind his saddle he has a pile of skins and they smell horribly. Most people are straight up not interested but if anyone asks what type of skins these are then the knight answers that they are human skins that he took off the backs of his enemies during war. He had everything made out of them: his clothes, boots, and his saddle. Hearing this people run away but once there was a man who asked for a price. The knight said he only wants peace and the skins taken off his back. The man buying was happy to hear this; he took the horse, the skins and led everyone straight to hell.

He was the devil himself. The devil pointed out a group of men waiting for them and said that they were the knights victims and enemies. They were now going to take the skin off the knight's back every night. So, most nights the knight is suffering horribly in hell but every now and again the devil allows the knight back up with his horse and his skins. If he manages to sell them off to someone else then they will take the knight's place in hell.