It is always wonderful to see Estonian books translated into English and not only great works of ficton but novels of historic figures. One such book is the autobiography of Johan Pitka (1872-1944) who was a famous Estonian military commander. Pitka's autobiography was first published in Estonia during the 1930s and now, thanks to Canadian-Estonian, Hillar Kalmar, it has been translated into English. 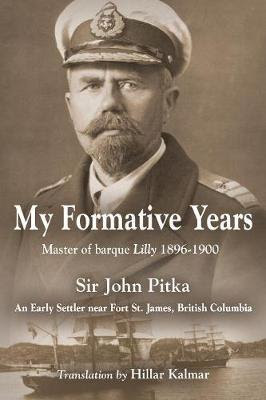 Johan Pitka (1872-1944) was born in Estonia, one of nine countries that border the Baltic Sea. Drawn to the ocean from reading tales of adventure as a child, he first saw the sea at age 12. After working aboard ships during summers and attending maritime school during winters, he earned his master's license in 1895. Pitka became captain of a wooden barque named Lilly at age 24. From 1896-1900 he made four Atlantic crossings with this cargo ship and also sailed the Caribbean, Mediterranean and Baltic Seas.

When Lilly was sold after her owner died, Pitka worked aboard other vessels until 1907 when he co-founded a shipping agency and chandlery in Liverpool. He moved to Tallinn in 1911 to advise shipping companies and represent the Canadian Pacific Railway in the Baltics.

Pitka founded the Estonian Navy during WWI and contributed to the success of the Estonian War of Independence (1918-1920) In 1919 he was appointed Rear Admiral and received a knighthood (KCMG) from Britain's King George V in 1920.

During WWII, Pitka's three sons were arrested and executed by the Soviets and Pitka disappeared in 1944 while organising resistance. His wife and two daughters managed to escape and resettled in British Columbia.

Pitka's autobiography describes his voyages aboard Lilly, giving insight to how they helped him develop the initiative, confidence, character, resourcefulness and will that he showed in later years.