As of today Estonia has the lowest 14-day coronavirus rate in Europe at 41.1 per 100,000 residents. Estonia is also one of just three European countries together with Moldova and Montenegro, where the rate has fallen in the past two weeks.  The highest infection rates in Europe can be found in Belgium and the Czech Republic. 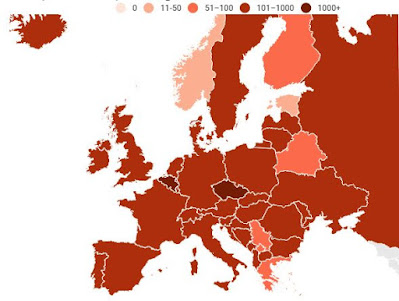 The spread of the coronavirus has been stabilised thanks to the responsible, attentive, and careful behaviour of the people of Estonia, said a representative from the Estonian Health Board. Whilst this is good news for Estonia there are new concerns about the virus. Previously it was thought that a person could not contract the coronavirus twice, that the body builds an immunity to it, but this theory has been dispelled. A handful of people across the globe have been reinfected, The first case was reported in Hong Kong, then Belgium, Ecuador, USA and last week in Estonia. These people tested positive in March then again in September. Immunity only appeared to last 3 - 6 months. Some people reported that their symptoms were more severe the second time round.
So what can we do to protect ourselves while we wait for a vaccine to be approved? Abide by the 2 metre social distancing rule. Don't sit down in a cafe or restaurant where the other table is only 30cm away from you (this is common in Italy and France). Wear a mask in all indoor public places. This should be compulsory in every country of the world yet its not. Crazy. A mask needs to cover both your nose and mouth because if you inhale the virus through your nose it typically goes to your lungs, and if you breath it in through your mouth, it ends up in your stomach. Stomach acids gets rid the virus but if it settles in your lungs, that is when it can be dangerous and you may need to be hospitalised.
Research has revealed a very interesting point about the coronavirus. The vast majority of people who have been hospitalised or have died from the virus were found to be deficient in Vitamin D. This explains a why so many elderly people in care homes have died and even younger people in England. They simple don't get enough sunlight. Health experts have advised people to up their intact of Vitamin D either by spending more time in the sun and/or taking suppliments. As winter nears in the Northern Hemisphere, this advice should be followed more than ever.
Posted by Tania Lestal