A level of optimism is sweeping across Europe at the moment. As more and more people are being vaccinated against coronavirus and infection rates continue to fall, the restrictions imposed upon our lives have begun to ease. Now that the weather is warming up, thoughts of a summer holiday frequently cross my mind. It has been a while since I last visited Estonia, over two years and I am eager to return. When I last spoke to my brother, he too expressed his desire to visit Estonia again so a family trip in August might be on the cards.

Over the years I have experienced many interesting things during my time in Estonia. I've also encountered other amusing things whilst being an Estonian travelling abroad. It's great to travel and come home with interesting tales to tell. Here are some of mine.

In 2005 I was holidaying with my family in Estonia. It was mid-morning and we walking back from the supermarket to our apartment in Tallinn. We were aware of a young man walking behind us but we ignored him until he approached us. He was thin, aged in his early 20s, staggering abit and obviously intoxicated. I noticed he had dried blood on his forehead and it was clear he had been awake all night. He spoke English with a Russian accent and told us he was out of money. He wanted to buy another drink. As we walked he tried to engage us in conversation, we were polite but not willing to keep his "party for one" going. He couldn't tell where we were from, only knew we spoke English and really tried to get us to feel sorry for him. Not getting the result he wanted, he became frustrated and began rambling off different currencies, hoping we might give him some. He first asked for kroons, then euros, dollars, poinds and rubles. He was willing to accept anything. When he said yen, we just had to laugh, obviously we're not from Japan. In the end, we told him it was best for him to just go home but he kept saying 'Why you not give?' Why you not give?' He really expected us to give him some money. In hindsight, we probably should have given him something, just for the comedy. He was quite amusing. When he eventually walked away from us we heard him cursing, saying to himself  'Fuck you, motherfuckers!'. We couldn't help but laugh. Years later, this guy still comes up in our conversations. We like to impersonate him  - he was a real character! 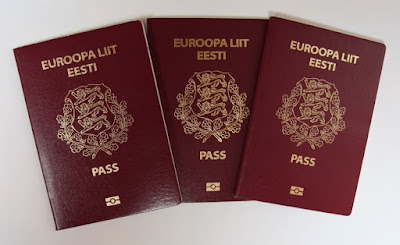 Around twelve years ago I boarded an Air France flight in London. I did the usual thing, entered the plane with my boarding pass and passport in hand and approached the flight attendants who would then direct me to my seat. Standing at the entrance were two male stewards, I presented my boarding pass to one of them who then skimmed his finger over to look at my passport. 'Estonie?' he exclaimed excitedly. 'You are Estonian?' he asked. 'Yes, well my father is', I replied. His colleague then pricked up his ears and looked over rather excitedly too. They told me they had never met an Estonian before - I was the first one. They were very happy to meet me. They wanted to take a look at my passport and I let them,. They marvelled at it.with big smiles on their faces. They made such a fuss that I was actually taken back.  I didn't expect that when I boarded the plane, my mind was on other things. The French stewards wanted to engage in conversation but wasn't sure what I should add. I think I eventually said 'you should go to Estonia, it's a beautiful country.' They nodded their heads enthusiastically and said 'yes, yes.' A queue was forming behind me so I bid I them farewell. I then sat down in my seat and thought to myself - that was a first. 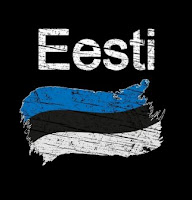 I enjoy travelling and like to hear the sound of different accents when I walk through foreign cities. One thing I don't expect to hear during my travels is the Estonian language yet I have come across it several times now. In 2005 I was on holiday with my father in San Francisco, we were in a gift shop when we heard two men speaking what sounded like Estonian. Our ears pricked up instantly when we heard it, but I was a bit further away and unsure, so I whispered to my father 'as you sure they are Estonian? Maybe they're Finnish? 'No, no, they're definitely Estonian' my father replied, smiling. We were chuffed. The thing is when you encounter a fellow Estonian abroad, you feel compelled to say something to them. Acknowledge the shared kinship.  We walked over to them and my father said something like 'you are a long way from home' (in Estonian). They looked up in surprise. One of them said 'seems like you are too'. We then had a little chat and my father explained we are Estonians from Australia.  They said they would like to visit Australia one day. It was a nice encounter.

Another time, I was visiting Eagles Nest in Germany.with my father when we heard Estonian spoken by a family. They were discussing what tickets to buy. Once again, we felt compelled to say something - there's so few of us in the world that it's great when we meet fellow Estonians by chance. We walked over to them and warmly greeted them in Estonian. I noticed their eyes widened in surprise when they realised we could speak Estonian.  We didn't talk long, just wished them well with their tour. It was nice. 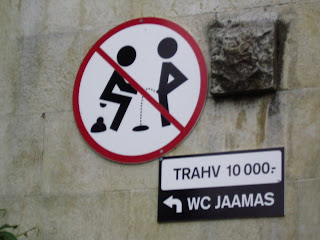 When I first visited Estonia in 2003, I was taken aback when I saw this sign outside the main train station in Tallinn. It obviously meant people were doing these acts in public and it had become a problem. Never in my life had I seen a sign like this before, I was truly shocked. Urinating is one thing, but the other, that's utterly disgusting. The sign is no longer there so hopefully this means the problem no longer exists.

In the future there will be more trips, more experiences, more things to enlighten and surprise me.