How to Achieve Happiness? A University of Tartu Academic Had an Answer 200 Years Ago | News | ERR 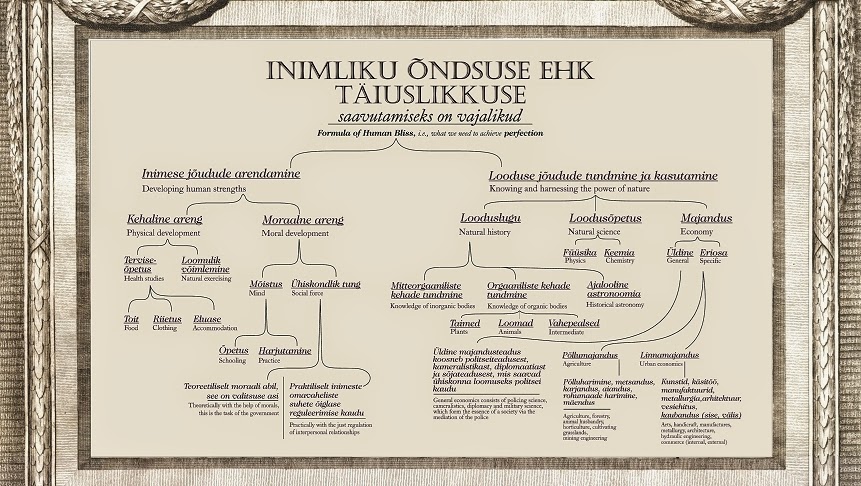 Two hundred year ago, people also understood the meaning of personal happiness and regarded it as a choice or something we decide to be. “I have chosen to be happy because it is good for my health,” said Voltaire, the French writer and philosopher in the Enlightenment era.

But during the Enlightenment happiness was seen as something that is shared by the whole community, rather than a personal state. The task to make everyone happy was the primary objective of every benign ruler. A booming economy, the welfare of citizens, and a system of law and order were the measures by which a sovereign was judged as either good or bad. Every citizen had to do his or her share in order to achieve the common goal.

While we sometimes disregard the past, research has shown that, as a rule, educated people during the Enlightenment were full of optimism and had a strong belief in progress. This in turn, encouraged them to be creative and invent new things, climb the highest mountains, circle the globe or set up schools for the poor. Every member of society needed to have a specific objective and feel responsible for the greater good; everyone had to feel they were being useful.

Parrot's happiness formula basically reflects this holistic mindset. He didn't write a poem or a philosophical essay, but he drew a pyramid-like schema, depicting the indicators needed to make us happy in a unified society.

In his diagram, human strengths and the power of nature combine seamlessly, creating a harmonious structure “to achieve perfection”. He interweaves natural and social sciences, arguing that the purpose of physics is to make us understand nature, because the laws of nature form the basis of discussion about the links between cause and effect. In his formula, Parrot also put emphasis on the connection between agriculture and science – as at the time it was believed that only agriculture produced new value. Economics – manufacturing, consumption, and trade – is a unified whole that is seen as a living organism, whose growth depends on free enterprise. Parrot thus shows economics as a branch of “Knowing and Harnessing the Powers of Nature” in his scheme. Education is depicted as a branch of “the Development of Human Potential (Strengths)” in his chart, as are morals. The message he imparts seems to emphasize the importance of educating everyone in order for people to use their knowledge for the sake of the common good.

The energetic Parrot, a German by birth, was himself a committed member of society. He wrote over 120 scientific papers and lectured many students. Last, but not least, he became the first rector (chancellor) of the re-opened University of Tartu (then named University of Dorpat) in 1802 – the successor to the Swedish-founded Academia Gustaviana university which ceased to exist in 1710 when Tsar Peter the Great conquered Estonia. While working there, Parrot skillfully fought for academic freedom and the right to self-government by the university – to protect it from the political pressures of Baltic-German barons who were given autonomy by Russia to govern in the Baltic provinces.

Source: How to achieve happiness? A University of Tartu academic had an answer 200 years ago | News | ERR
Posted by Tania Lestal