The Bank of Estonia have launched (24th July) their latest collector coin to mark the XXX Olympiad hosted this year in London from the 27th July. During the presentation ceremony, which was held in the main auditorium of the Bank of Estonia’s newly renovated Museum, the Bank’s President Ardo Hansson was joined by many past and present athletes who have made their mark in previous Olympic Games.
Estonian athletes have participated in the Olympics under their own flag almost immediately after establishing independence in 1918. The Games in 1920 saw the first Estonian team participate and after the re-establishment of Independence in 1991, the Barcelona Games of 1992 welcomed the Estonian team once again. On hand to join in the presentation were Jaak Uudmäe, former triple jumper and long jumper, and gold medalist winner at the 1980 Summer Olympics - Jüri Tarmak, competitor in the 1972 Summer Olympics held in Munich, Germany in the high jump where he won the gold medal - Ivar Stukolkin, an Olympic champion in swimming, Ivar won the gold medal competing in the 1980 Games in Moscow. Each Olympian who attended the ceremony was presented with the latest Estonian Olympic commemorative coin by Mr. Hansson.

The silver coin, which has a face value of 12 EURO is struck at the Royal Dutch Mint and is the work of artist Liis Dvorjanski (who was herself presented with one of the first strikes by Mr. Hansson). The obverse depicts the artist’s interpretation of the visual image of movement, synonymous with sporting activity – represented with wavy lines and swirls reminiscent of human movement. The reverse includes a traditional representation of the national coat of arms of Estonia and the year 2012 integrated with a correspondent design of the obverse.

Minted in pure silver (.999 fine), the coin is struck in proof quality with a weight of 28.2 grams and a diameter of 38.6 mm. A mintage of just 7,500 coins has been authorized for distribution. This is the fourth Olympic related commemorative coin issued by Estonia and second EURO-denominated coin issued by the Bank of Estonia, the first was in 2011 marking Estonia’s adoption of the single currency.
For more information on this and other coins offered by the Bank of Estonia, please visit the website of the Bank’s Museum retail shop at:http://www.eestipank.ee/pub/en/press/muuseum/pood/ For international orders – please visit the retail store of the Estonian Post shop website at:http://www.post.ee/9521 Both sites are in English but Estonian Post can fulfill orders to most countries.
Posted by Tania Lestal

Estonia at the Olympics

Traditionally wrestling, but discus and rowing represent their best chances in London.

Kristjan Palusalu won two golds at wrestling in Berlin 1936 - the only Estonian to win two Olympic titles - but discus thrower Gerd Kanter will aim to join that exclusive club if he can build on his gold in Beijing with victory in London. Kanter, who won silver at the World Athletics Championships in Daegu in 2011, will be joined in the discus competition by Aleksander Tammert. 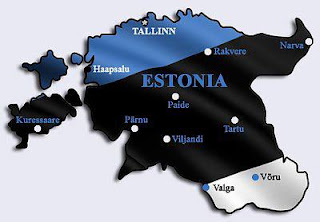