In 1525 the first book published in the Estonian language was printed.  The book was a Lutheran manuscript, which never reached the reader and was destroyed immediately after publication. The first extant Estonian book is the Wanradt-Koell catechism from the year 1535.

During the period 1940 to 1941 as many as 99 publishing houses were nationalised. Censorship was common and most of the literature published during the period of independence was banned in an attempt to limit the influence of Estonian culture. In 1941, Germany invaded Estonia and the process just described was repeated, this time with a fascist instead of a communist perspective.

After the war Estonia was annexed by the Soviet Union.  The annexation brought with it strict censorship and the destruction of books, which continued until 1949.  The publishing houses, which had been established as nationalised companies in 1940-1941, were united into the monolithic Estonian State Publishing House.  In 1964 the Estonian State Publishing House was divided into two organisations but nevertheless censorship remained tight.

By the end of the 1980s, ideological control had been significantly reduced.  Censorship and the centralised management of publishing houses were abolished.  Market economy conditions started to operate and state funding was given only to publications regarded as most important.  During the beginning of the 1990s already some 750 publishing houses, organisations and associations were involved in one way or the other with the producing of books, newspapers and magazines in Estonia.

Since the restoration of independence, the Estonian publishing sector has become completely privatised. Today, there are no state owned publishing houses except for Perioodika, which is a limited company with the state as the major shareholder.

Throughout the privatisation process, the number of publishers has increased enormously. In 2001, the number of publishers with an ISBN prefix registered at the National Estonian ISBN Agency was 351.  The total amount of companies, institutions and organisations involved in publishing activities in Estonian is hard to define. The National Library database records some 600 companies involved with publishing according to the works received as legal deposit.  About 50 publishers are serious enough to have their books displayed in nearly all retail outlets.  Most of these publishers produce works in all kinds of subjects. Publishers specialised in certain areas are rare - there is one Jewish and one Russian publishing house. Some printing companies are acting as publishers from time to time as well, serving mostly their local community.

In 1992 the law on copyright was adopted in Estonia and in 1994 Estonia joined the Bern Convention.

European Region Airline Association (ERA) recognized Estonian Air for its excellence and achievements with Airline of the Year 2012/2013 Silver Award. It is the first time the carrier has won an ERA Award.
Estonian Air was recognised as an outstanding example of a successful link between an airport and a regional carrier, where the hub and spokes model has enabled to attract a considerable amount of transfer traffic and leading up to an impressive growth. Estonian Air is distinguished by very clear targets and an innovative approach. The focus on new social media constitute major achievements.
Tero Taskila, the CEO of Estonian Air was presented with the trophy at the ERA annual Awards event yesterday evening in Dublin, Ireland. “Is a great honour to receive such an acknowledgement from the regional airline business community and international media. Our team is passionate to continue the path of developments despite the challenging and complex market conditions,” said Taskila.
Estonian Air also got an Award for excellence in recognition of consistent, accurate and timely punctuality reporting.
The Gold went to Wideroe and the Bronze to Atlantic Airways.
About ERA Airline of the Year Award
The ERA Airline of the Year Award was introduced in 1991 and has since grown to become the most widely recognised industry award in this sector. The aim of the award is to recognise the best overall achievement by an ERA member airline over the previous 12 months. It also provides a significant opportunity for the winner to raise
their profile in the international air transport industry. In 2000, the Airline of the Year Award was extended to incorporate Gold, Silver and Bronze accolades.
ERA airline members are diverse by nature and the focus of this Award is therefore on specific achievements that are evaluated in the context of an individual airline’s operating conditions. The judging panel comprises a mix of industry's senior experts together with respected air transport journalists from all over Europe.
About ERA
Founded in 1980, ERA is the principal body representing the interests of the intra-European air transport industry in Europe. It is an association of over 200 companies, representing the entire industry, including airlines, airports and associate and affiliate members comprising aircraft and engine manufacturers, international and regional airports, and avionic suppliers and service providers. ERA’s Airline members are operating in 32 countries and carry over 70 million passengers annually. Estonian Air joined ERA in December 2011.
About Estonian Air
AS Estonian Air, Estonia’s national carrier, provides both business travellers and tourists direct air link from Estonia to European cities. Estonian Air is the biggest operator at Tallinn Airport. Estonian Air focuses on improving the connection between Estonia and the rest of the world with the aim of increasing competitiveness as a network carrier hub. The airline flies currently to 20 destinations in Europe, Scandinavia and in CIS.
Estonian Air was recently chosen among the top 5 airlines in Northern Europe by Skytrax. In November 2011 in Miami, USA, Estonian Air’s social media loyalty programme AirScore won a Mega Award in the category of the Best Social Media Campaign.
Posted by Tania Lestal

Estonian Tourist Board Recommends: 10 Fascinating Locations in Estonian Nature That You Cannot Miss


Northern and Western Estonia
When you travel in Northern Estonia and on the Estonian west coast, you can discover the beauty of unique Estonian landscapes. See beautiful seaside landscapes, fishing villages and mossy pine forests. Explore stylish manor buildings and Soviet military objects.
Travel across the sea and discover Estonian islands with their unique nature, old village sites, adorable windmills and ancient churches.
Southern Estonia
Southern Estoniais a magnificent area, where woody hills alternate with beautiful lakes. When there is snow, you can play winter sports; in summer, you can swim in pretty little lakes and go on hikes. The cultural heritage ofVõrumaa, Mulgimaa and Setomaa deserves your full attention. Look out in forests – maybe you will see some large predators around.
Posted by Tania Lestal

Makes you feel proud to be Estonian.

A beer from Estonia’s Saku Brewery has been crowned a "world's best" style winner at the World Beer Awards in London. Saku Porter took top honours for the Strong Porter style in the Stout & Porter category late last week, beating out a much stronger-by-volume Canadian beer.
Saguenay Criminelle (10 % ABV) was praised for "big body and booziness" but Saku Porter was hailed for a "full and rounded mouthfeel."
The other European winners for the styles in the Stout & Porter category were from Britain, Ireland and Denmark. Several of them were defeated by entries from Oregonian breweries, and Deschutes's the Abyss, an imperial stout from Oregon, was picked the overall world's best in Stout & Porter.
"Leatheriness", which is presumably a very good quality, was mentioned no less than twice in the evaluation. Saku's product (alcohol 6.9 % by volume) was described as having a "very nice vineous aroma, leathery. Full and rounded palate, beautifully sweet, complex yet light and fresh. Great mouthfeel, very moreish. Good length with more leather on the finish."
Posted by Tania Lestal

How to Set up a Business in Estonia

Useful information can be found at:

Estonia's University of Tartu remains in the top 3% of the world’s best universities and was ranked in the 351-400 block on the Times Higher Education (THE) list.
Thirteen different indicators are taken into consideration in drawing up the list, describing the study environment, the influence of research results, the amount of research work, reputation on the basis of interviews, innovation, and the range of internationalisation, a press officer for the University of Tartu told BNS.

During my recent trip to Tallinn I purchased a copy of Ott Lepland's latest album "Laulan ma sind". It features the beautiful song  "Kuula" which he sang at Eurovision in Baku this year and also has many other great tracks. 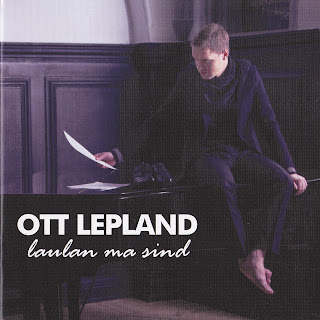 Here's one of my favourite songs from his album -