Estonians are not known for their humour but of course they can be funny like everyone else. It's rare to see an Estonian give a big belly laugh when they find something amusing; usually they respond with either a grin or a smile. Estonian humour closely resembles British humour with common elements being self-depreciation, deadpan, sarcasm, irreverence and the ridiculing of authority. Estonians tend to be more funny from the comments they make rather than the jokes they tell. There is not a huge repertoire of Estonian jokes that have been translated into English but I have managed to collate a few. 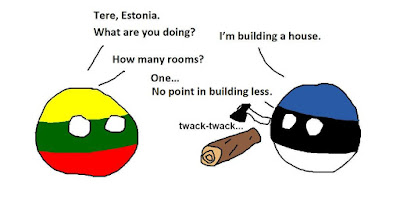 An Estonian is driving to his summer house and sees something on the road. He stops his car and sees that it is a dead crow. He thinks a bit, and then tosses it in the trunk of his car. “Maybe it will be of some use” he thinks.

Come autumn, the same Estonian is driving back from his summer house. He stops at the same place on the road, opens his trunk, and throws the dead crow on to the road, mumbling to himself: “Didn't need it after all.”

There’s a joke about Estonia and technology. An American find cables underground during a construction project, he concludes that ancient Americans knew about telephones. A German digs 200 metres and finds glass fibres and concludes that ancient Germans already knew about fibre optics. An Estonian gets curious and decides to dig, only to find nothing despite of going all the way to 2000 metres. The conclusion: evidently ancient Estonians already used WiFi.

Joke 5. Once there was an Estonian who loved his wife so much that he almost told her.
(Estonian men are not known for being romantic or overly affectionate.)

Sometimes Estonians are ridiculed for being slow because they generally think carefully before they act and don't hurry.  Here are a few jokes for Estonian speakers.