What a wonderful time I had in Tallinn for Independence Day this year! I went shopping and stocked up on my favourite Estonian food and was relieved to discover I wasn't over with my luggage allowance when the time came to return to the airport. (Last time I was 6kg over!)

On Independence Day we had the perfect weather we had hoped for. I was a bit worried on Saturday as the sky looked drab and grey but when I woke up on Sunday morning I was pleasantly surprised to see a beautiful big blue sky and sunshine. It really was ideal conditions for everyone to gather to enjoy the Independence Day parade.  I watched the parade with my cousin Jaanus, we found a good vantage point on the slope looking down upon Freedom Square. It was great seeing people waving flags and showing national pride. It was a really lovely day.

Naturally I took loads of photos -  I always do! Can't help myself! Here are some of my best ones. 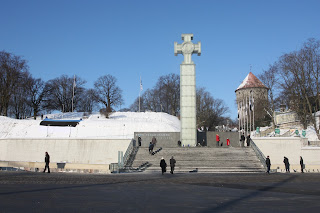 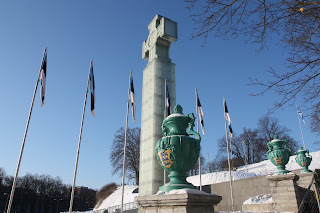 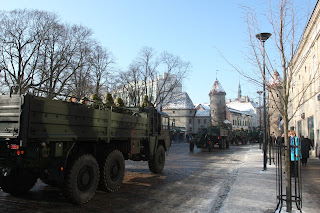 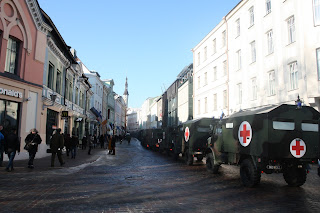 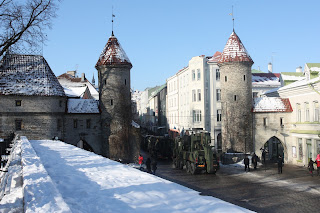 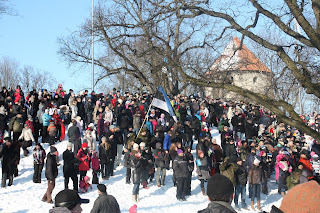 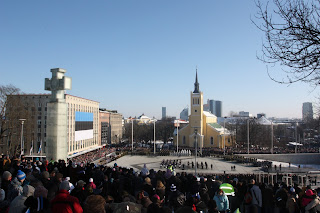 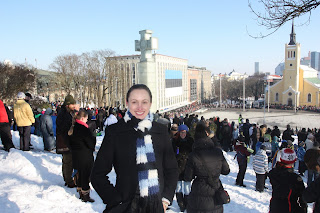 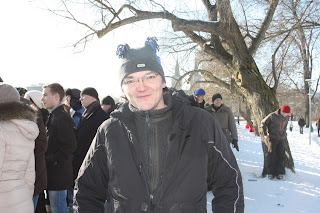 As an avid fan of French cinema I was pleased to discover that a new Estonian/French film collaboration is part of the Alliance French Film Festival in Australia this year. Une Estonienne a Paris has received good reviews worldwide and is definitely a film worth watching and perhaps one to add to the DVD collection.

Eesti Vabariik - Maa, Rahvas, Kultuur is a valuable reference book that provides a comprehensive overview of Estonia's history from the first inception of independence to present day Estonia. With over 700 photos, statistical tables and geographical maps it really is one of those books that every Estonian should have in their home. 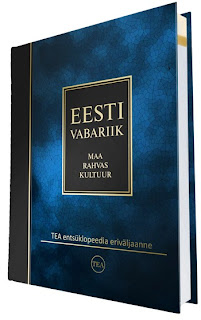 More information can be found at:
https://kirjastus.tea.ee/est/Tootekataloog/TEA_ents/?productID=23755694
You can also browse a few pages of the book here are well.
Eesti Vabariik - Maa, Rahvas, Kultuur can be ordered online and shipped internationally.

Estonia was featured in "Yours" magazine last week - so was my father! 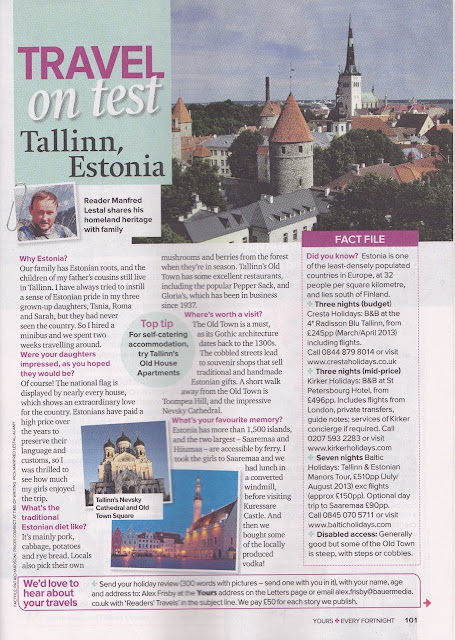 All this week I have been debating with myself whether I should fly to Tallinn for Independence Day. I was there last year but of course this year is the big year - the 95th anniversary. Estonia has really bloomed since regaining its independence and I do feel a sense of pride. Sadly both my Estonian grandparents died before independence was restored in 1991. They never got to see their country free again.  If they could see how wonderful and free Estonia has become today I know without a doubt how proud they'd be. All Estonians love their country and they were no exception. Out of all my immediate family I am the one who tends to go back to Estonia the most.  The more I discover about Estonia, the more I love it. It's truly a beautiful country - its people exude strength yet gentleness at the same time. War and occupation may have caused my family to leave Estonia but freedom is what has enabled us to come back. 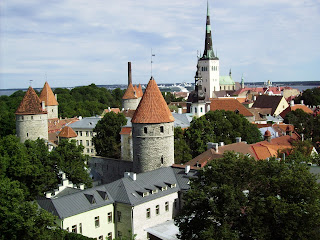 They say you learn something new every day and indeed I have today. I was completely unaware of Pärnu's ice festival but now I have read up on  it,  it sounds like a winter wonderland and I can't wait to go! The festival is full of exciting events and things made out of snow and ice, including sculptures, an ice bar and restaurant and ice cinema all illuminated with thousands of decorative lights. A good article explaining what it is can be found on the "Visit Estonia" website.
http://www.visitestonia.com/en/parnu-ice-festival-estonias-biggest-winter-family-festival 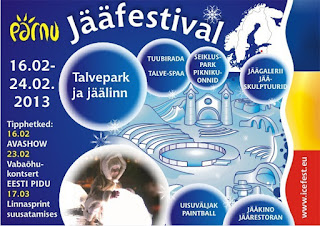 Now is a Great Time to Visit Estonia

When I walked down to my local U bahn station in Munich on Saturday I was delighted to find an advertisement for Estonia on the infoscreen.  "Visit Estonia" was displayed in big bright letters and I must admit I felt a stirring of national pride seeing it there. It got my day off to a good start!

Now really is a great time to visit Estonia. There is a lot happening this year and you'll bound to discover something new. Independence Day celebrations are just around the corner and a stream of events are scheduled to take place throughout the year to mark the 95th annivesary.

One thing I am interested in seeing myself is the exhibition of the best 25 designed Estonian books for 2012. Each year the National Library of Estonia showcases the winners of the annual competition, displaying the works of talented Estonian artists and designers. The exhibition runs until the end of February so if you're in town for the Independence Day celebrations it's definitely worth a visit.
http://www.nlib.ee/the-best-designed-estonian-books-chosen/

If you are interested in visiting Estonia and would like to learn to improve your Estonian before you go, Tartu University is offering a brand new online course starting in March. For those of you who are not aware, Tartu University is a highly respected education institition, ranked in the top 3% of world's best universities. My grandfather's cousin used to be a linguists professor at Tartu University and published several books on Estonian/German grammer.  Language studies has always been a big part at the unversity program. More details can be found at:
https://www.is.ut.ee/pls/ois/tere.tulemast?viit=4531784

The Launch of a New Estonian Tradition

Ahead of Estonia's 95th Independence Day on February 24, the Heritage Society has proposed starting a new tradition of lighting candles on the graves of great figures of Estonian culture and society in the month of February, ERR News reported.

President Toomas Hendrik Ilves will launch the new custom on February 8 at the Tarvastu cemetery, where he and local students will pay respects at the final resting places of the nation's first Olympic medalist, Martin Klein, as well as those of art historian Helmi Üprus and scouting leader Harri Haamer, according to a press release from the Office of the President.

Schools everywhere in Estonia will follow, making trips to their local cemeteries.

"Youths will be introduced to our statesmen, writers, artists, musicians and heritage preservers to give a sense of the individual's role and the role of the spiritual heritage that it has in a small nation's history," the statement said.
http://news.postimees.ee/1129858/heritage-society-to-hold-candle-lighting-ceremonies-on-graves-of-greats/
Posted by Tania Lestal


There will be nearly 1,100 servicemen taking part in the Republic of Estonia anniversary parade in Tallinn, and it will be possible to see different defense forces machinery at the parade.

The Independence Day parade will start in Vabaduse (Freedom) Square in Tallinn on February 24 at 12 noon, with the units lining up at 11.15 a.m., a press officer for the defense forces headquarters told BNS. The parade will be received by President Toomas Hendrik Ilves, will be headed by commander of the Defense Forces, Brig. Gen. Riho Terras and commander of the Defense Forces Headquarters, Col. Peeter Hoppe will line up the parade.
All the armed services will be represented: the Defense College, the Staff and Communications Battalion, the Guard Battalion, the Kuperjanov Infantry Battalion, the Viru Infantry Battalion, the Scouts Battalion, the Artillery Battalion, the Anti-Aircraft Battalion, the Air Monitoring Division, the Logistics Battalion, a navy unit, the Kaitseliit Tallinn Company, the Kaitseliit Harju Company and the Estonian Academy of Security Sciences. Music will be played at the parade by the Defense Forces' Brass Band and the Band of the Police and the Border Guard Board.
There will be nearly 1,100 members of the defense forces, members of Kaitseliit and cadets of the Estonian Academy of Security Sciences in the parade. There will be 23 flags and and six companies, four batteries, seven platoons and two bands lined up in the parade.
In accordance with plans there will be a flyover of the Estonian Air Force machines along with the Police and Border Guard helicopter and the Police and the Border Guard Board helicopter and F-16 fighters of the Danish Air Force.
Of the armaments and machinery it will be possible to see in addition to small arms also 155 and 122 millimeter howitzers,  Mistral anti-aircraft complexes, ZU-23-2 anti-aircraft cannon, Milan and Mapats anti-tank missile complexes, 120 and 81 mm mine throwers, 90 millimeter bazookas, Sisu XA-180 and XA-188 armored personnel carriers, a mobile Ground Master air surveillance radar, and different battle support vehicles. After the parade it will be possible to see the equipment and machinery at an exhibition in Vabaduse Square.
The main rehearsal of the parade will take place at 9 p.m. on February 23 in Vabaduse Square.