A look at Estonian Bogs (raba)

All Estonians are familiar with bogs and the environmental benefits associated with them. Estonia is rich in peatlands, it is the oldest organic landscape that started to emerge some 10,000 years ago, right after the last ice age. Bogs cover 6-7% of Estonia's territory and the government have projects underway to preserve them. This video by Artur Rehi explains many things about bogs and Estonia's fondness for them.
More informationm about bogs can be found here.
Posted by Tania Lestal

Disappointing result for Estonia at Eurovision 2021

The second semi-final of the Eurovision Song Contest took place in Rotterdam last night. Seventeen countries performed trying to secure one of the ten places in the final. Uku Suviste represented Estonia with 'The Lucky One' and despite having a quality song with good lyrics, he didn't make it through to the final. Many Estonians went to bed disappointed last night knowing weaker songs proceeded in the compeition. It all comes down to votes and although many of us assumed Estonia would be there in the final, we should have done more to help him get there.
With Estonia no longer in the competition, Eurovision looks less appealing to watch on Saturday night. If I had to pick a winner, I would probably like to see France win this year.
Posted by Tania Lestal

Twenty years ago today Estonia won the Eurovision Song Contest for the first time with the catchy tune Everybody. It was a great triumph for the performers Tanel Padar and Dave Benton as well as the country. Next week the 2021 Eurovision Song Contest will take place in Rotterdam. Estonia's representative will be Uku Suviste with his song The Lucky One. Suviste recently made this promotional video highlighting some of the best places to visit in Tallinn.
Posted by Tania Lestal

The Tallinn city museum recently held an outdoor exhibition dedicated to the district of Kalamaja. I was invited to share the story of my family who lived there for several generations. Even though my family left Kalamaja a long time ago now, the area will forever remain dear to me. It was home.

Extract of my story as it appeared in Tallinna Linnamuuseumi ajaveeb. 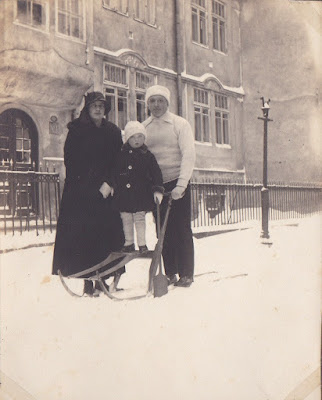 The district of Kalamaja was long regarded as home for my family. My grandfather Alexander Lestal (born 1921) grew up there and was surrounded by family who lived nearby. His cousin Ralf Lesthal (grandfather of Andrei Nazarov) lived in Graniidi Street and his cousins Dorothea and Karl Niggul lived at Köie 1a-1. My grandfather's parents spent several years living in Russia prior to his birth. His mother Margarethe studied to be a cook in Moscow and his father Arthur was an accountant, photographer and translator. When they returned to Estonia in 1922 they briefly lived at Köie 1b, next door to Arthur’s mother Helene (Leenu) Lesthal before moving to Kopli Street. Margarethe owned a laundry at Kopli 22 called ‘The Rekord’.

In 1918 my great-great-grandmother Helene moved into the Lender House at Köie 1a. It was a very modern stone building for its time and was one of the first buildings in the street to have indoor plumbing. Three generations of the Lesthal/Niggul family lived at Köie 1a-1 up until 1941. There was Helene, her daughter Ellinor with husband Karl Niggul and their two children. My grandfather Alexander often stayed with them during the week when he went to school in Tallinn. His uncle Karl Niggul was a very noble and upright man. He fought in the Estonian War of Independence then went on to study law before serving as a judge at the Tallinn district court. He sometimes had to go to Saaremaa to work on cases. Aunt Ellinor was a very loving and kind woman who doted on her family. She made birthdays special and was the perfect mother in the eyes of her children. All the grandchildren in the family called Helene ‘Amama’ and my grandfather Alexander had the kodunimi ‘Buba’. 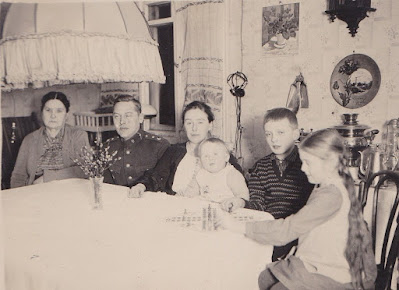 Left to right: Helene, Karl, Ellinor with baby Karl, my grandfather Alexander and Dorothea.
The house at Köie 1a was only a few minutes’ walk from the Baltic Sea. When my grandfather and his cousins were growing up, they could hear the sound of horns and sirens coming from the ships in the harbour. Their imaginations often ran wild as they wondered where the ships came from and where they were going. During the 1930s life was quite joyful and idyllic for them all in Kalamaja. It was a prosperous time with lots of family gatherings, parties and music. My grandfather Alexander was quite gifted musically, he could play the piano and picked up new instruments with ease. His favourite instrument was his piano accordion. His cousin Dorothea loved to listen to him play and he took it with him everywhere. 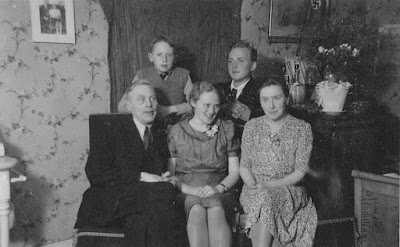 Family portrait 1940.
My family probably would have remained living in Kalamaja and indeed Estonia if it wasn’t for the Soviet occupation. In 1940 the Soviets took control and began demoting and replacing people in public service with inexperienced communists. Provocateurs appeared in the streets and people started going missing. Karl Niggul remembered walking past the Riigikogu the day the Soviets lowered the Estonian flag atop Pikk Hermann Tower and replaced it with the red Soviet flag. It was a sad, sad day he would never forget. As danger loomed the family made the reluctant decision to leave Estonia. They applied for passage on the second wave of the Baltic German resettlement Programme. With a heavy heart they left their home in Köie 1a-1 and resettled in Germany. Years later, in 1979, Dorothea returned to Kalamaja and visited her old home. To her surprise, her former neighbour, Mr Talivee still lived there and told her about everything that had happened during the past 38 years. Dorothea was also overjoyed to be reunited with her cousin Ralf. He was one of a handful of relatives who had remained in Estonia. Dorothea later wrote a short memoir about her childhood in Kalamaja. They were some of the happiest years of her life.
Posted by Tania Lestal

The Estonian Government recently announced it has gone live with VaccineGuard to support the country’s response to the COVID-19 pandemic. Secure Vaccination Certificates, issued through the VaccineGuard platform for international travel are available immediately enabling Estonia citizens to cross borders with proof of vaccination status. The platform is based on a year long collaboration with the Estonian, Hungarian, and Icelandic Governments, the World Health Organisation and AstraZeneca Estonia. 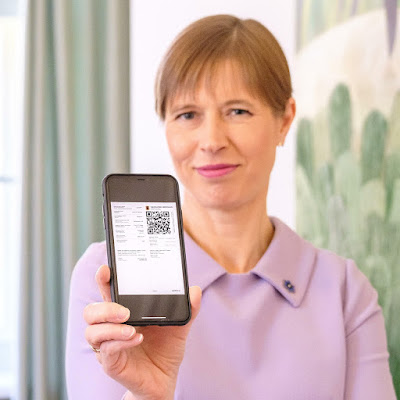 President Kaljuliad with the VaccineGuard app
VaccineGuard is a digital platform that connects the different participants in the vaccine ecosystem. This includes vaccine manufacturers, hospitals, public health authorities and citizens. By enabling these participants to share data and verify its authenticity across organisational boundaries and international borders, VaccineGuard enables real-time insights, pharmacovigilance, counterfeit detection and many other benefits enabling a faster and reliable pandemic response.
More information can be found here: VaccineGuard: Secure Vaccination Certificates
Posted by Tania Lestal