I have been researching my family history for many years now. Since the tender age of fifteen I have been making enquiries into my genealogy and in 1993 when I received my first document from Estonia - my grandmother's birth certificate, I was thrilled. Not even my father had seen a copy of his mother's birth certificate before so it was a special moment for both of us.

Since moving back to Europe in 2011 my main focus has been on locating information about my family during their time living in Germany. Not all of my family migrated to Australia after WWII, my great, great grandmother and her daughter's family decided to settle permanently in Germany and I have been following up those leads. For the past year I have been busy writing letters to various government derpartments in search of relevant information. It's a time consuming exercise but well worth the effort.

A few weeks ago my research took a new direction - the displaced person camps in Germany after World War II.  I always knew my grandparents and great-grandmother lived in these camps before immigrating to Australia but I didn't know much about the camps themselves. I also assumed my family lived in the same camp in Hamburg but I recently discovered they didn't. My grandfather Alexander Lestal lived in Study Centre Pinneberg Camp whilst my grandmother Hertha Pralitz (nee Lindsaar) and my great grandmother Margarete Lestal lived in Zoo Camp. Prior to WWII my grandparents didn't know each other, they met in the camps. My grandmother had been previously married and had a young son, she was alone in the camp with no other family. It was while my grandfather went to visit his mother that he met his future wife Hertha who was living at the same address. They fell in love and married shortly after arriving in Australia.

From the enquries I have made in recent weeks it appears I am not alone in the quest for information on displaced persons camps. It is particularly difficult to find information about "Zoo Camp". I have contacted the United Nations archive office in New York but they weren't able to supply much information. Only the names of some of the Estonian doctors who worked at Zoo Camp and reports relating to the overall health of the refugees were found. They were not able to supply information on people's individual files.

If you would like to know more about the displaced persons camps in Germany, here is a brief overview. 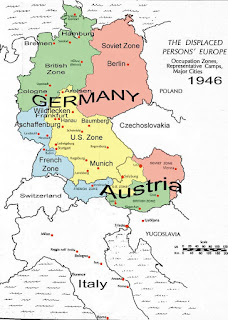 After World War II Germany was occupied by the allies and divided into four zones - British, American, French and Soviet. Millions of people were left displaced and had to rely on foreign aid for survival. Approximately 200,000 Baltic people were registered as being displaced in Germany in 1945 with 33,000 of them being Estonian. During the years 1941-1944 many Estonians fled their country due to the repression and brutality of the Soviet Army who invaded Estonia in 1940.

In 1945 military missions in the British, American and French zones established displaced persons camps to  provide temporary shelter, nutrition and healthcare to refugees. Hundreds of camps existed all over Germany. Later in 1945 the running of the camps was handed over to The United Nations Relief and Rehabiliation Adminstration (UNRRA) and then later to the International Refugee Organsation (IRO) in 1947.

The original plan for the displaced person camps was to repatriate people to their country of origin as quickly as possible. By the end of 1945 the military managed to repatriate over six million displaced persons but soon realised that it was not possible to do the same with the Baltic peoples. Even though the war was over, their countries were still occupied by the Soviet Army and returning home would mean persecution, deportation or even death. Some camps tried to pressure and force people to return home, particularly in French camps where officials bowed to pressure from the Soviets. There have been documented cases of Polish refugees being forcibly sent home, arrested and then executed for their involvement in resistence fighting during the war. Many Estonians residing in the French camps became aware of France's backdoor dealings with the Soviets and, under various guises, were able to be transferred to American or British zone camps in order to escape this threat.

People were grouped together according to nationality in displaced persons camps. Upon arrival they registered their details and were given a DP identification number. For example, my grandmother Hertha's number was 064057. Accommodation varied from camp to camp, buildings such as military barracks, private homes, hospitals, schools, hotels and airports etc were used to house people. My family were living in Hamburg in the British zone and given a private home in which to live. I'm not sure how many other people lived in the same building but the address was Heimhuder Str.81, Hamburg.

Camp life, particularly for the Baltic people was very culturally rich. As many of the people who fled Estonia, Latvia and Lithuania were intellectuals, artists and farmers they brought a lot of skills with them to the camps. They established their own workshops, newspapers, schools and training centres etc. Many very finely made wooden, leather and embroidered items were produced by Baltic peoples residing in the camps.

Many Estonians had hoped that the American Army might go and liberate Estonia from the Soviets but this never eventuated, in fact it was never on their agenda. For the Estonians living in the displaced persons camps, all they could do was wait to see what their futures held. They made applications to resettle elsewhere but places were limited and they always lived in fear of being handed over to the Soviets. 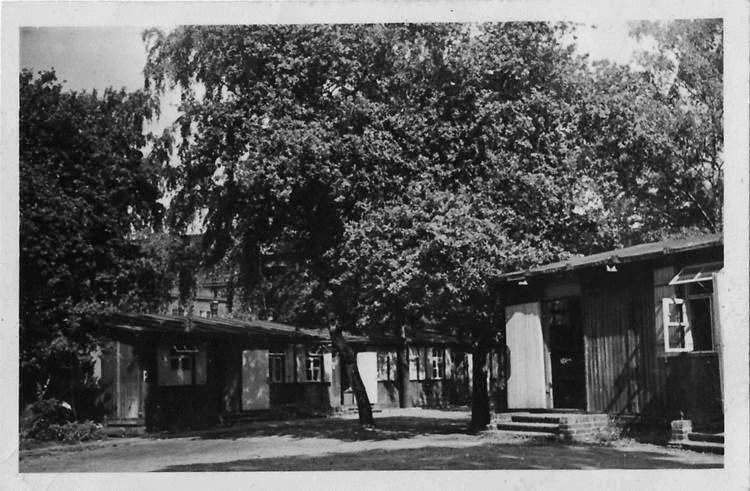 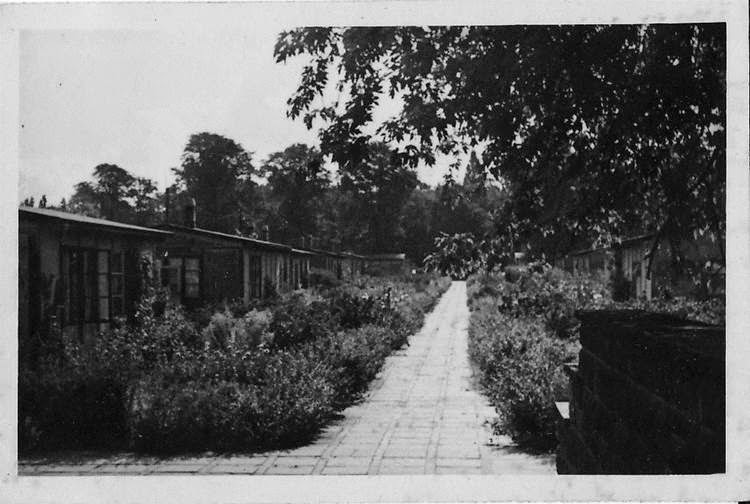 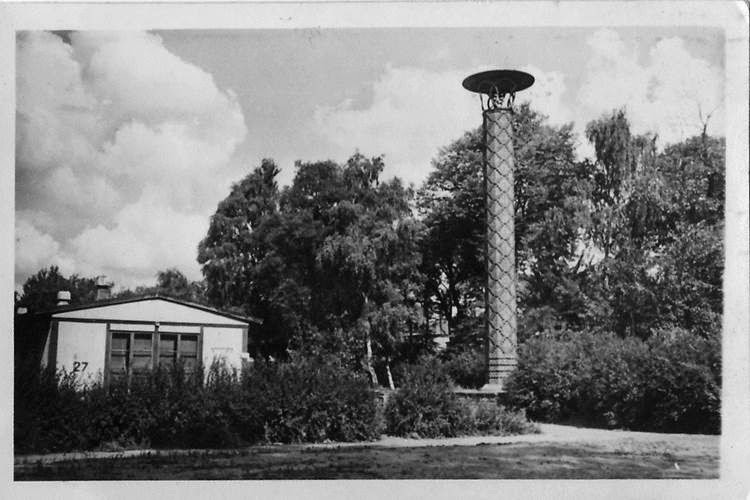 In 1947 the Australian government entered into an agreement with the IRO to allow displaced people to migrate to Australia. Single men and women had the best chances of migrating as long as they were in good health and fit for manual or domestic labour. The following year, the US congress passed the Displaced Persons Act which modified their existing immigration policy, enabling more refugees to enter the United States with less restrictions. These new laws led to a mass exodus of people from the camps in 1948-1949 to the United States, Canada, Australia and Britain. The United States accepted 415,000 displaced people outside their regular quota and Australia took in 182,158 refugees of Baltic and Polish origin. France, Belgium and Brazil also accepted small numbers of refugees but some DP's favoured Australia as a location as it was as far away from Europe as possible. 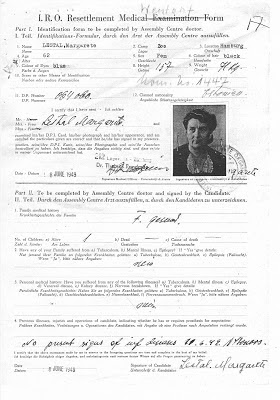 When leaving the camps, displaced persons were issued with a  "Good Conduct Certificate" stating their name, date of birth and the date they first started residing at the camp. 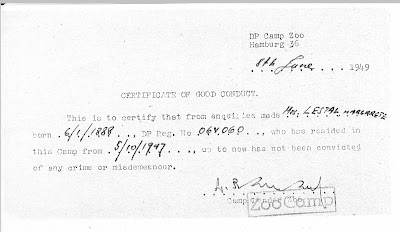 My family emigrated separately to Australia. My grandfather Alexander was the first to arrive. He departed Europe from a port in Genoa, Italy and arrived in Melbourne on the 23rd December 1948 on board the ship "The Protea". The journey took one month. My grandmother was the next to arrive with her son Kuno, they travelled on board the "SS Dundalk Bay" which departed from Trieste, Italy and arrived in Sydney on the 16th April 1949. My grandfather sought permission to bring his mother Margarete to Australia and on 7th September 1949 she arrived in Sydney on board the chartered US army ship "Marine Jumper" along with 843 other refugees. 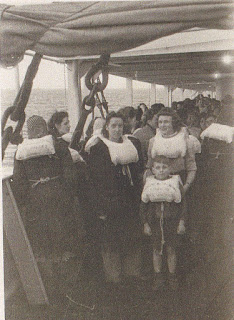 Photo of my grandmother and uncle Kuno on board the SS Dundalk Bay.

If anyone has any information on Zoo Camp or Pinneberg or if you knew my family while they lived in the camps or on board the ships, I would love to hear from you. Please write to me at tanialestal@gmail.com Photos and stories from Zoo Camp and Pinneberg would be greatly appreciated. Thank you in advance!

N.B. Zoo Camp was located within the grounds of Hamburg Zoo. The actual zoo was destroyed during  WWII and became a forced labour camp until the end of the war. The camp was built by the Blohm & Voss, a shipbuilding and engineering company, to house the forced labourers that worked in their factory. The wooden barrack style accommodation was later used to house displaced persons. When the DP's arrived the barracks were in poor condition, wet and cold and many of them contracted tuberculosis as a result. Compared to other camps Zoo Camp had food shortages and people often felt hungry.
The address of Zoo Camp given on offiicial paperwork was:
Zoo Camp
Hamburg 36
b.d. Kirchhofen

Pinneberg Camp or otherwise known as DP Study Centre Pinneberg was located 18 km northwest of Hamburg. It was located in a former Luftwaffe school and later housed the Baltic University from early 1947. The living conditions for displaced persons at Pinneberg were much better compared to Zoo camp as the buildings were made of stone. 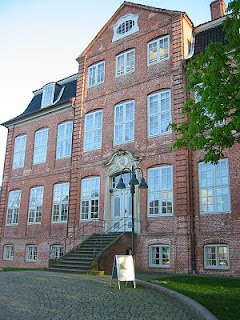 For more information about Pinneberg you can contact the state archive in Germany at the following address.
Stadtarchiv Pinneberg
Bismarck Str.8
25421 Pinneberg
Germany