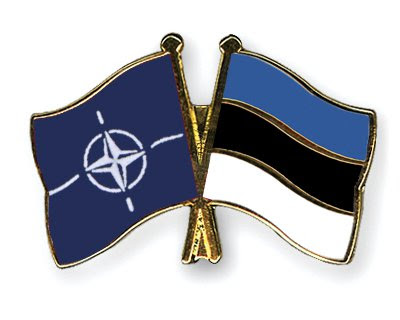 There are currently 28 member countries in the NATO defence alliance, they are:

For more information about NATO, please click here: What is NATO?
Posted by Tania Lestal

After the successful launch of the ESTCube satellite in 2013, the team are now in the process of developing technology for the new ESTCube-2.  Help support this worthy endeavour and contribute to science by donating to their new crowdfunding campaign! 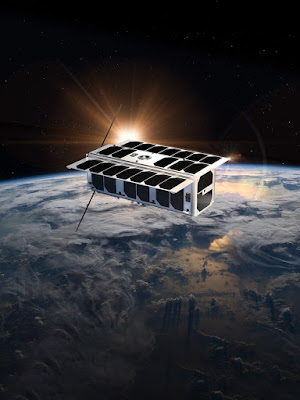 The development team are currently building ESTCube-2, a CubeSat three times the size of ESTCube-1, that will be sent to low Earth orbit. This is perfect for testing a 300 m long E-sail wire, or so-called tether. The revolutionary E-sail can give the satellite a push to move faster in the Solar System, but can also work as a brake in the Earth’s magnetosphere. On ESTCube-2 the team will use the E-sail as a plasma brake that can bring the satellite down faster and therefore help to mitigate the space debris. Space debris is a dangerous phenomenon. If we leave all the old and non-operational satellites to orbit the Earth and keep sending new ones up, then in 50 years the Earth will be surrounded by so many satellites, that safely accessing space would be become a lot more difficult. Technology developed on ESTCube-2 could be the solution!

The team are planning to complete ESTCube-2 in 2018 and launch it into space in 2019. The timeline is tight and they want to have the satellite completely finished in honour of the 100th anniversary of the Republic of Estonia. With your support, we could give this small but courageous country a one-of a-kind present – a high-tech satellite!

68 years ago today, 3% of the Estonian population were seized and deported by the Soviets to remote areas of Siberia. Candles will be lit on Tallinn's Freedom Square today in the shape of Estonia, and the names of the 32,000 people directly affected by the deportations will be projected onto a large screen. 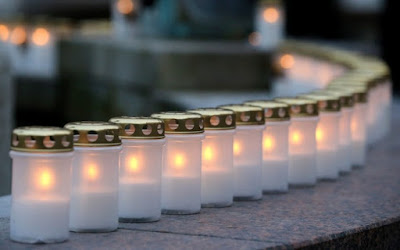 May this crime never be forgotten. 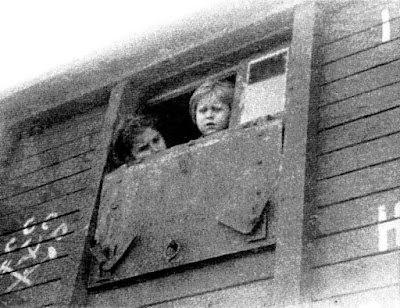 The 26th Estonian Song Celebration and 19th Dance Celebration "Touched By Time. The Time To Touch"


Always a joy to watch this truly unique Estonian event. The first Estonian Song Festival was held in Tartu in the summer of 1869 and now takes place in Tallinn every five years. The next song festival will be held in July 2019. Can't wait! 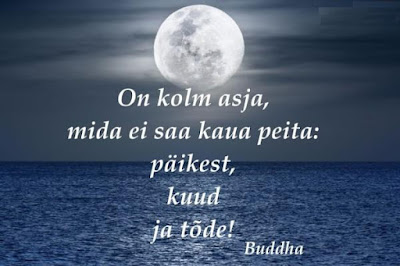 There are three things you can not hide for long  - the sun, the moon, and the truth. 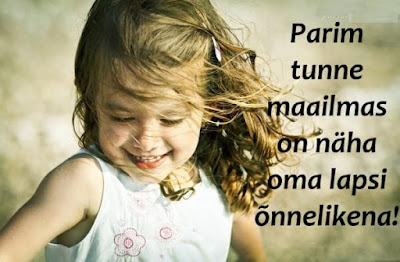 Literature Map of the World

It's great to see Tammsaare's 'Tõde ja õigus' (Truth & Justice) mentioned on the list. As a child I absolutely loved Canada's 'Anne of Green Gables' series as well as the film version starring Megan Follows. For Australia however, I would have picked 'The Thorn Birds', opposed to 'Cloud Street' as it's a great Australian classic! 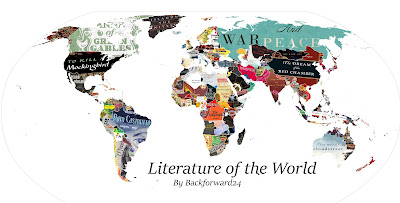 Very proud that Estonia was proclaimed the most entrepreneurial country in Europe! Below is a summarised version of the World Economic Forum report. 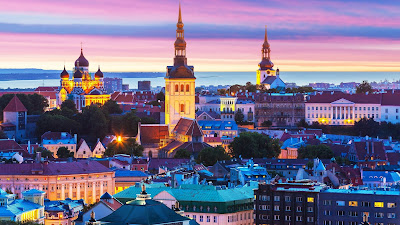 The report, Europe’s Hidden Entrepreneurs: Entrepreneurial Employee Activity and Competitiveness in Europe, looked at a form of entrepreneurship beyond the typical start-up – intrapreneurship – with some interesting conclusions. 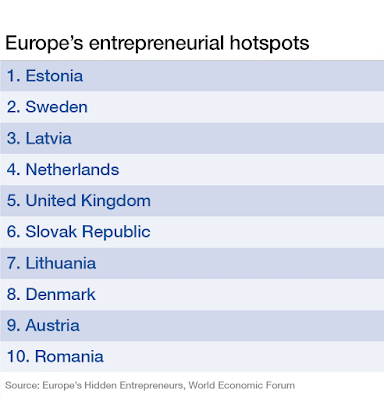 Northern Europe leads the way when it comes to entrepreneurship and innovation.

Intrapreneurship involves workers formulating and implementing new ideas within organizations, rather than starting their own businesses. In the report these are called EEAs, which stands for entrepreneurial employee activity.

Entrepreneurial individuals in Europe frequently choose to start new ventures or projects while working for their employers rather than start their own business, the report found.

When you look at TEA only, shown in dark blue on this chart, Europe doesn’t do very well compared to other major economies and regions.

However, when you add EEA into the mix, Europe comes after only the US, Canada and Australia. 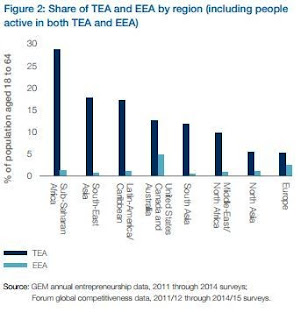 When you take both TEA and EEA together, a picture emerges of highly entrepreneurial Baltic countries. In this ranking Estonia comes out on top, while two of Europe’s largest economies, Germany and France, don’t even make the top 10.

Estonia has a high rate of TEA and an above average rate of EEA. Almost 80% of businesses started in Estonia are opportunity-driven and Estonia is often cited as a model for entrepreneurially-oriented policy, says the report.

Source: World Economic Forum Europe’s most entrepreneurial country? It’s not the one you might expect
Posted by Tania Lestal

I was sorting through some papers over the weekend and came across this story. I've had it stored away in my folder for over 20 years but have read it only once. It's a very short story and quirky like Estonian stories often are. I like the fact that it is written in both Estonian and English. Enjoy! 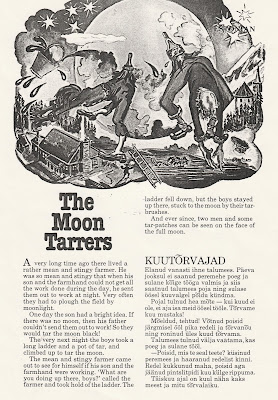 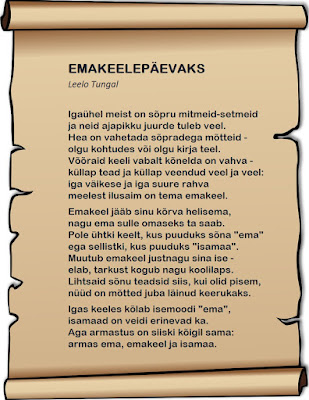 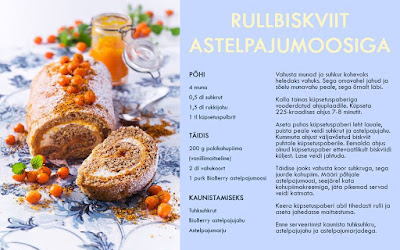 Estonians love their berries and these golden little gems are no exception. They taste sort of tart and have been used for centuries for their health enhancing benefits. Native to China, Russia, and Mangolia, they can also be found in Estonia and are used in many forms. You can find fresh sea buckthorn berries at markets and in some health food stores as well as in supplement and skin care products.


Sea buckthorn berries are considered a superfood, they are loaded with nutrients, with at least 190 bioactive compounds. Just one little berry contains more vitamin C than a whole orange, and it’s a great source of fibre, protein and loads of antioxidants.

They have excellent antimicrobial and antiviral properties as well as antioxidants that help to boost the immune system.

Studies also show that sea buckthorn berries can help patients who suffer form liver disease, like hepatitis B, due to it’s high vitamin A and unsaturated fatty acids and help to protect the liver from damage caused by toxins.

Great for the skin as it helps to heal wounds and burns when applied topically. It also helps you look younger by acting as a natural sunblock. Due to its high healthy fatty acid content, it also helps to relieve symptoms of dermatitis.

I woke up this morning to discover wonderful news in my inbox. Geni.com sent me a message advising that I am related to Estonian painter Johann Köler.  He is my third cousin four times removed. Following the connection online I find we are both descended from the Jorik family, on my grandfather's mother side. This is a wonderful news for me especially as my sister and uncle are both painters today. 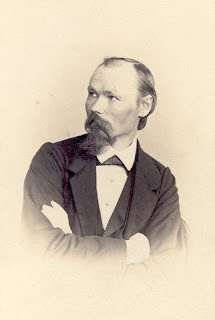 On this day in 1826, Estonian painter Johann Köler was born. A leader of the Estonian national awakening, Köler is considered to be the first professional painter of Estonia. Köler was born March 8, 1826 in Lubjassaare farmstead in Ivaski, Vijandi County to a peasant family. Although the family had little money, Köler managed to attend school and eventually study painting at the St. Petersburg Imperial Academy of Arts. Best known for his portrait paintings, Köler also worked as an art teacher for the Grand Duchess Maria Aleksandrovna, the daughter of Alexander II of Russia. During this time, a period in history that would be known as the Estonian Age of Awakening, Estonians began to see themselves as a nation that deserved the right to govern themselves. Köler used his connections with the imperial court to promote the cause of the Estonian people with intellectual leaders. 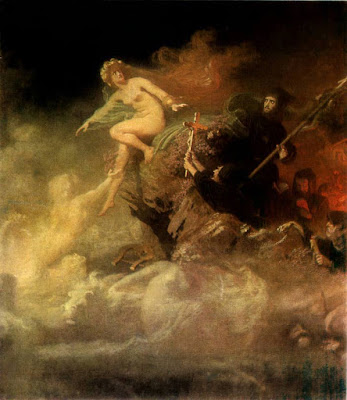 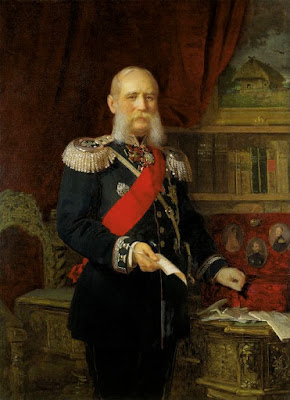 Portrait of Dr. Philipp Karell, Emperor's Physician (1886)
(Also a relative of mine)

If you like the Estonian band Trad Attack or simply want to learn a bit more about the beautiful country of Estonia, you might find this video of interest. I did!

Congratulations to Koit Toome and Laura who won Eesti Laul last night with their song 'Verona'. They will now represent Estonia at the Eurovision Song Contest. Eurovision will be held in Ukraine this year from 9 - 13 May 2017.

If you are like me and have Estonian grandparents who were displaced after WWII you might find this new book of interest. Several members of my family spent time living in German refugee camps before they decided to start a new life in Australia. It was only recently that I discovered that my grandfather originally planned to migrate to Brazil, rather than Australia. I found this information written on his exit form from the Baltic University. My grandmother however, always dreamed of going to the United States but unfortunately her application was rejected. Bearing this in mind, I realise my life would be significantly different if they had reached those destinations. 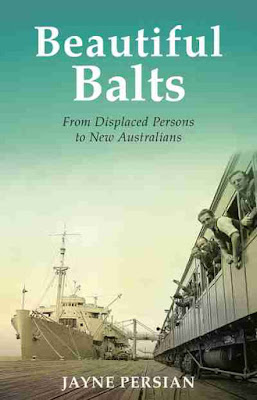 Synopsis:
170,000 Displaced Persons arrived in Australia between 1947 and 1952 – the first non-Anglo-Celtic mass migrants.

Australia’s first immigration minister, Arthur Calwell, scoured post-war Europe for refugees, Displaced Persons he characterised as ‘Beautiful Balts’. Amid the hierarchies of the White Australia Policy, the tensions of the Cold War and the national need for labour, these people would transform not only Australia’s immigration policy, but the country itself.

Beautiful Balts tells the extraordinary story of these Displaced Persons. It traces their journey from the chaotic camps of Europe after World War II to a new life in a land of opportunity where prejudice, parochialism, and strident anti-communism were rife. Drawing from archives, oral history interviews and literature generated by the Displaced Persons themselves, Persian investigates who they really were, why Australia wanted them and what they experienced.