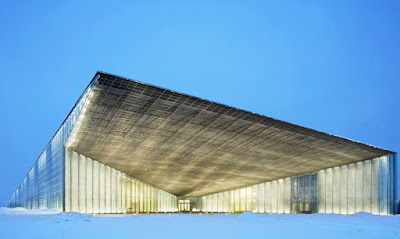 It's been years in the making and the wait is soon to be over.  The Estonian National Museum will finally open its doors at its new location on 1st October. For the past year the old site in Tartu has been partially closed due to the relocation with only a very small temporary exhibit on display. During this time, all other display items have been carefully transported to the new building.

The new home of the Estonian National Museum is absolutely huge and set to become the largest high-tech museum in the region. The site was originally part of the Raadi Manor estate, once owned by a Baltic German family. In 1940, a large part of the property was used to build a Soviet air base and the new museum occupies the old runaway.

The glass, box-shaped building was designed by Paris design firm Dorell Ghotmeh Tane (DGT) and is intended to restore the area’s cultural significance whilst showcasing Estonia's history and culture.