The fascinating field of genetic research had led to the discovery that all ethnic Estonians can now trace their ancestry back to one of five men. These men came to settle in Estonia during different periods in time and their descendants are all among us today. If you wish to unlock the secret of your DNA then participating in the Family Tree DNA  - 'The Estonia Project' may be the thing for you!

The Estonia project is a dual Y-DNA (paternal) / mtDNA (maternal) project, which is mainly created for ethnic Estonians, descended from paternal and/or maternal line from families that have their earliest-known origins in what is now Estonia. Over past centuries, territory of Estonia or parts of it belonged politically at various times to: German crusaders' and their descendants' states, Kingdom of Denmark, various Christian bishops, Kingdom of Poland, Kingdom of Sweden and Russian Empire. Populations moved to and from the neighbouring states of Latvia, Lithuania, Russia, Poland, Germany, Sweden, Denmark, Finland. DNA of families of Estonian origin could exhibit Finno-Ugric, Baltic, Western European, Eastern European or other characteristics. This group will allow those who have a family ethnic and geographic origin in Estonia to compare their DNA with that of their geographic neighbours and, possibly, find family matches.

The below video is about the male lineages of Estonians and is aimed at Estonians living abroad to participate in the genetic research.


I took the DNA test and it revealed some interesting results. When I told my sister she was quite disappointed to discover that we are only 3% British. As our mother's family are originally from England we naturally assumed the result would be closer to 50%. We were mistaken. It appears we may be descended from Norwegian vikings on my mother's side, which, I think is quite a good thing. I've always considered myself to have the heart of a warrior - I don't like to give up on things I believe in and I am very protective towards those I love. Makes sense to me! Unfortunately I have yet to discover which of the original five men I am descended from. This can only be determined from the Y chromosome in the male line so looks like I need to get my father tested! The test costs $99 US.

Once you take the DNA test you can see all the genetic matches and contact those people if you wish. I discovered that my closest relative in an man called Per in Sweden. We have since corresponded. 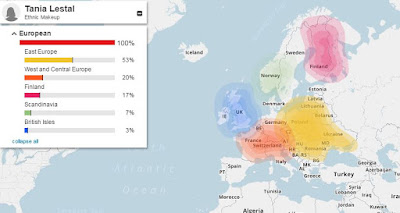 To find out more and to participate in the Estonia Project, please click here:
DNA test - genetic ancestry of Estonians