Almost 20,000 people attended the main concert of the Tartu Song Festival on Saturday, the first event to celebrate the 150th anniversary of the Song and Dance Festival. 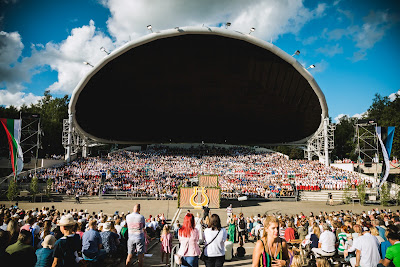 Around 9,000 singers and musicians, and the same number of spectators, gathered in the city's song festival grounds after a procession through the town.

The line-up featured songs by well known composers such as Arvo Pärt, Veljo Tormis, Gustav Ernesaks, and Miina Härma, which were accompanied by the Vanemuine Symphony Orchestra.

Speeches inspired by the first song festival were made by President Kersti Kaljulaid, and poets, writers, editors, from Finland, Latvia, and Estonia.

The Song and Dance Celebration will take place at the Tallinn Song Festival Grounds from July 4 to July 7. Dancers and choirs from around the world will take part in the celebrations.

The first nationwide song festival was held in Tartu in 1869 and has taken place every five years since. The concerts are featured on the UNESCO list of Intangible Cultural Heritage.

You can watch some of the procession here: