Estonians don’t traditionally celebrate Halloween however the custom has become more popular in recent years. It's always fun to dress up, decorate the home and throw a party! 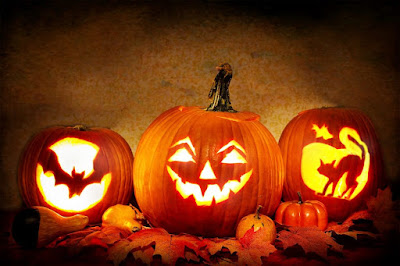 In celebration of Halloween, the VisitTallinn website has compiled a collection of eight ghost stories, all set in Tallinn. The most famous scary story from the Old Town is called 'The Devil's Window at Rataskaevu 16' and I also quite like 'The ladies of Toomkooli 13'
The Devil's Window at Rataskaevu 16
Once, long ago, the then-owner of the house at Rataskaevu 16 fell on hard times. Things were looking bad until a stranger came to him with an offer: allow the stranger to host a party in the upper left room of the house and in return there would be a bag of gold. The owner was extremely happy and promised complete privacy. No one would even go up the stairs while the guests were there! The guests arrived, and all went up to the little rented room, a lot more people than the room should have been able to fit.
As the party upstairs progressed, the owner got curious and snuck up to see what was happening. As he looked through the keyhole, he saw a wedding in full swing. But his hair turned white with fright because everyone at the party was on hooves, with horns on their head. And the beautifully decked out bride was accompanied by none other than the devil as the groom.
The owner ran down the stairs and hid the whole night. When morning came, and the roosters called out and the entire party rushed out of the house and disappeared into the morning mist. By noon, the owner was brave enough to go up to the room where he found his bag of gold only to have it turn to dung in front of him. No money for him. Ever since then, the devil has a habit of using the room whenever he wanted and so the following owners walled the whole room in.
The ladies of Toomkooli 13
Two ghosts haunt this house: the Gray Lady and the Black Lady. Both thought to be Estonian girls, and both had the rotten luck of having the attention of the von Uexküll family men. The Gray Lady was a maid in the house, and she was beautiful. She got the attention of the lord of the house and was forced to become his lover. But soon he grew tired of her and killed her one night. He had her walled into the basement's wall, but she might have been alive then still because now she appears in a grey dress and with long ragged nails as if she had tried to claw her way out of somewhere. She tries to strangle men sleeping alone and has a manic laugh.
The Black Lady was a girl from the countryside. She fell in love with the lord's son and he with her. They were going to get married, but before that, she had to meet the family. The young man brought her to Tallinn, and his family was very upset and unhappy. But there was no changing the young couple's mind. The wedding preparations went ahead, and everything seemed fine until one morning the bride was missing. The groom looked far and wide but never found her. He should have looked real close, though, because she never left the house. His father killed her and buried her into the basement. Now she walks around in black looking for the lover that never came back.
To read more Estonian ghost stories, please click here Top 8 ghost stories of Tallinn
Posted by Tania Lestal