The Extinction of the Baltic German Population in Estonia

For over 700 years Baltic Germans called Estonia home.  The first Germans came in the 12th Century with the Christianisation of Eastern and Northern Europe and further waves of German-speaking merchants, crusaders and missionaries came in the decades that followed.  Their descendants would later make up the local German-speaking population which remained in Estonia and Latvia for countless generations thereafter.

The Baltic Germans formed the social, political and commercial elite in the territories which later became Estonia and Latvia.  The descendants of the crusaders formed the population of feudal landowners and the traders’ descendants formed the urban elite.  Indigenous Estonians and Latvians were for many centuries serfs and did not enjoy the same rights that the German minority did.  As influential as the Germans were, they never comprised more than 10% of the local population.

Both Estonia and Latvia have been occupied by foreign empires for most of their documented histories including the Danish, Swedish and Russian empires and later the Soviet Union.  The German minority managed to hold on to their hegemony throughout the centuries, even as the lands they controlled fell to other powers.  The various empires essentially gave them free rein or stewardship over the lands.  Their privileged position came to an end with the rise of Estonian and Latvian nationalism in the early 20th Century and the birth of the independent Baltic States.  Since the Germans had lived relatively peacefully alongside the respective indigenous populations, many of them stayed and took on either Estonian or Latvian citizenship, successfully integrating into life in the young independent republics.  Many Baltic Germans intermarried with the local populations over the centuries and their descendants came to love Estonia and Latvia as their own countries, despite their German ethnicity.

The rise of Nazism in Germany and Stalinism in the Soviet Union would, however, permanently alter the destiny of the Baltic Germans.  Hitler’s rise to power in the 1930s and ambitions of conquering Europe led him to sign a secret pact with Stalin known as the Molotov-Ribbentrop pact.  Estonia, Latvia and Lithuania fell under the Soviet “sphere of influence” and Hitler successfully persuaded the great majority of Baltic Germans to resettle in newly conquered Polish lands which had been annexed to the German Reich, before the Soviet invasion which occurred in 1940.  Any Baltic German who wanted to emigrate could.

Many Germans did not want to leave the only home they had ever known with the first wave but once the Soviets had occupied the Baltic countries, many Germans got a taste of how horrific life would be under Soviet rule and petitioned the German government to be allowed to resettle.  This resulted in a second wave of resettlement to the new “German” lands known as the Nachsiedlung and effectively emptied the Baltic region of nearly all its ethnic Germans.

Soviet occupation after WWII from 1945 to 1991 meant that the Baltic Germans never returned and ceased to exist as a separate ethnic group.  However, their legacy in Estonia and Latvia remains with the many manor houses they built, language (30% of Estonian vocabulary comes from Low German), work ethic and Lutheran Christianity. 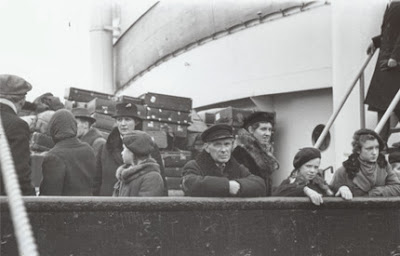