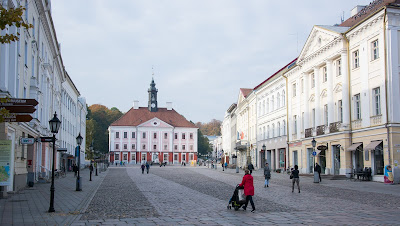 Tartu, the second largest city in Estonia and its self-proclaimed intellectual capital, is the first city is the Baltic-Nordic region to become UNESCO City of Literature.

UNESCO's City of Literature program was launched in 2004 and forms part of its Creative Cities Network. This year, Tartu and eight other cities were welcomed to the program, almost doubling the number of Cities of Literature in the world. The first to earn the honour in 2004 was Edinburgh in Scotland, followed by Melbourne and Iowa City in 2008.

“The most characteristic feature of cultural life in Tartu is creativity joining all free arts, openness to new ideas and a will to attract the citizens and the visitors to join these creative experiments,” the application committee said. “Tartu is historically a city of verbal arts and literary culture but it is also essential that in Tartu literary activity is closely connected with other arts and spheres of life: many events and projects bring together literature, music, visual arts and performing arts and literature often serves as the connecting link between different spheres of culture.”

Tartu is the location of several state institutions like the Ministry of Education and Research, Estonian National Museum, and Estonian Literary Museum. The city is also the centre of many nationwide literary events and projects, including the Estonian literary festival Prima Vista, and has over one thousand institutions related to creative industries registered in the its Business Register.

Tartu submitted its preliminary application for the title in 2013 and the final application in July 2015. The application process was led by the Estonian Literary Society.

“Tartu is a city where culture, creative freedom and interdisciplinary innovation have been vital aspects of identity, of local and global aspirations to uniqueness as living environment. Becoming a member of the CCN is an acknowledgement of our historic and current creative achievements, but foremost an affirmation of our willingness to share best practices with partners worldwide,” the committee said.