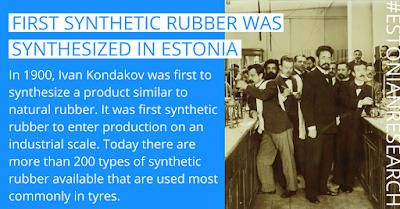 Did you know that the first synthetic rubber that had commerical success was synthesised in Estonia?

Ivan Lavrentyevich Kondakov (1857–1931) took a post as pharmaceutics professor at the University of Tartu in 1895. In 1900, he became the first in the world to synthesise a product that had similar properties to natural rubber. He published his discovery in 1901 and wrote the first monograph on synthetic rubber in Tartu in 1912. The method he used, resulting in methyl rubber, is known today as the Kondakov process.

Today there are more than 200 types of synthetic rubber available. The most common products made from these materials include bicycle and automobile tyres