Estonian Folklore - The Reverence of Bread

Bread has always been a centrepiece of Estonian culture and is considered almost sacred. For centuries rye bread has featured on the table in every Estonian home and no meal is complete without it. Bread features prominently in many Estonian proverbs and even marriage proposals give reference to bread.  Estonians used to be quite superstitious and our treatment of bread often involved many rituals.

Here follow ten rituals, customs and proverbs associated with this most important of foodstuffs.

1.When slicing a loaf of bread it is customary to have the "opened" end pointing away from the door, otherwise the bread may flee the house.

2. As a house warming gift it was always tradition to bring salt and bread.

3. If you dropped a piece of bread on the floor it was customary to pick it up and kiss it as a mark of respect.

4. Never slice a new loaf of bread after sunset.

5. When wishing someone a pleasant meal, instead of saying 'bon appetit" Estonians were once prone to saying "jätku leiba"  (may your bread last).

6. It is an Estonian birthday tradition to bake a sweet bread called "kringle" which is shaped like a pretzel.

8. Bread has also been known to feature as part of a marriage proposal. The proverb "Paneme leivad uhte kappi" literally means "let's put our bread in the same cabinet".

9. Bread is never wasted, when stale it's often used in soups such as "leivasupp" or puddings e.g. "saiavorm".

10. It is tradition to bake gingerbread at Christmas time.

If you ask an Estonian living abroad what they miss most about home, the answer quite often is bread. It may seem so basic yet Estonian bread is like no other. It's utterly delicious! During my last trip to Estonia I brought home half a dozen loaves of bread with me, later wishing I had room in my suitcase for more! Peenleib is just too tasty! 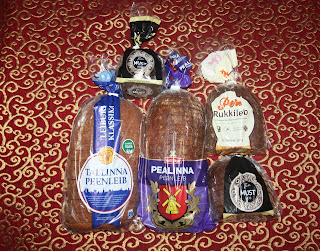 It may sound silly but for me, one of the things I look forward to eating the most in Estonia is küüslauguleib - Estonian garlic bread.  I absolutely love it!!! 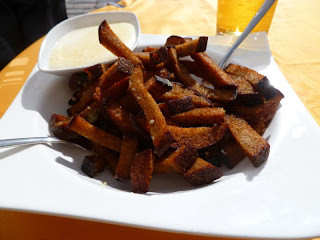