Count Reinhold Anrep-Elmpt, the Baltic German Who Had Lunch with Ned Kelly

There are not many 19th century connections between Estonia and Australia but one story of particular interest is that of Count Reinhold Anrep-Elmpt, the Baltic German who concealed his identity and travelled to Australia  in search of adventure. For several hundred years the Anrep-Elmpt family owned the Kärstna Manor estate located in southern Estonia and remnants of their family chapel and cemetery can still be found there today. Both Reinhold Anrep-Elmpt and his father Joseph were career military officers, generals in the Russian army. 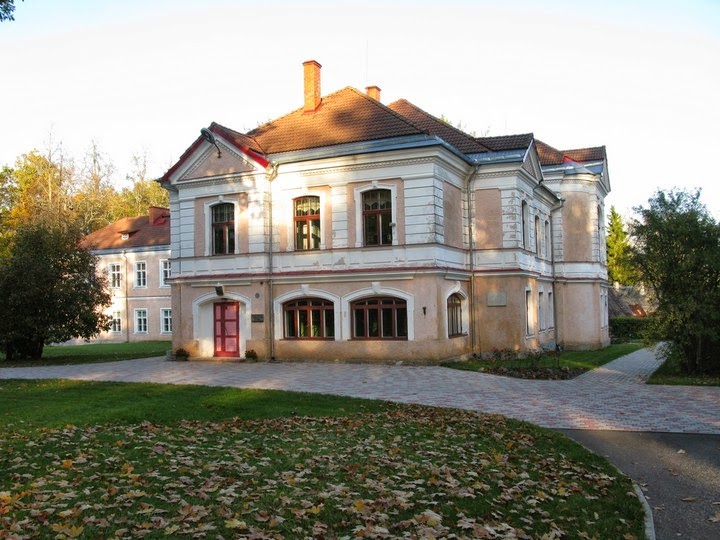 Count Reinhold Anrep-Elmpt travelled extensively during his lifetime and was seldom at home. His world travels included South America, USA, Egypt, Japan, India, Sri Lanka, the Caribbean  in addition to trips to other countries in Europe and Africa. The Count travelled twice to Australia but it was his trip in 1879 that saw him meet unexpectedly with Australian bushranger and outlaw Ned Kelly.

While in Australia Count Reinhold Anrep-Elmpt passed himself off as a free settler, telling no-one of his nobility and travelled modestly at all times. He paid for his travels by tuning pianos and organs in churches and private homes and went by the name Reinhold Anrep. He recorded all of his experiences in detail, almost in military fashion, which included that day in December 1879 when he encountered Ned Kelly. The Count wrote his diary in German and this experience was later translated into English by J. Tampke. You can read part of his diary below. 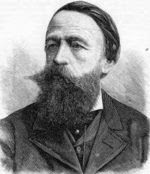 I rode over numerous bridges and dykes across the marshes of the Murray to Wodonga, the terminus of the Victorian railway line which will soon link Melbourne and Sydney by rail. Wodonga station lies 537 feet above sea level and the rail distance to Melbourne is 187 miles.

Wodonga is a small place situated in hilly bush country. There is only one long road in Wodonga, which is situated in the county of Bogong, Murray district, on the Wodonga creek, an arm of the Murray. Town buses link the railway station with Albury and there are six hotels, two banks, four insurance agencies, four churches - a pretty Lutheran one among them, two mills and one saw-mill upon a hill, a brewery, a public school and a number of private schools. There was also a customs office and a few houses for the tradespeople, craftsmen, fruit merchants, agents, auctioneers and money-lenders. Some cottages and huts were also spread here and there around the town.

The place looked fairly lively, as one would expect of a place where the railway line terminates. The town may possibly retain this busy character even after the linking of the Victorian rail line with the NSW line, as it is a border town.

After I had fortified myself with a good breakfast in the Imperial Hotel I left the town which extended a long way along the road and passed the elegant railway station on my right, before I disappeared into the dry woods.

The mountainous road and the gorges of the numerous creeks looked picturesque but the road was in poor condition and very steep, going uphill most of the time around countless curves. It was an isolated area and the few dilapidated farmhouses and generally gloomy looking huts appeared deserted. The country looked wild and desolated. 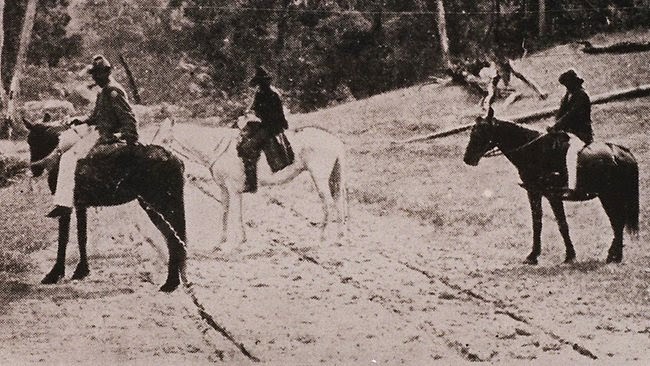 It was about twelve o'clock when two riders emerged from the bush. Their horses were slender and strong and the two men rode towards me and with the call 'Halloo old man' they asked me to stop. One of the riders was a good-looking gentleman with broad shoulders and a neat beard. He was wearing a rider's outfit typical for this country, that is, a colourful woollen shirt of best quality, trousers made from good fabric and an excellent pair of high boots, his strong leather belt carried a couple of handy revolvers, and a wide-brimmed felt hat, weatherbeaten but nevertheless still very sturdy, covered his head, the saddle, too, concealed heavy armament. His companion was taller and more sloppily dressed. His lean face showed clear signs of a restless character.

I thought at first that I had run into two troopers. I had come across troopers occasionally and they wore similar clothes.  The friendly manner with which the former addressed me dispelled all suspicion and I halted. They came closer and the first one asked questions in an abrupt, military manner. He wanted to know where I came from and where I was going to, whether I had seen anyone on my way, what I had heard and seen in Albury and Wodonga. After I had answered all his questions the first one nodded amiably to his companion and then said to me: 'Well, old man, come and have some lunch.' I followed them into the bush where a small fire was burning near a creek.

The excellent lunch was made up of a good whisky, cold meat of the best quality, bread and butter and tea in a tin cup. During lunch they asked more questions, especially about the country constabulary and whether I knew anything about the Kelly brothers. 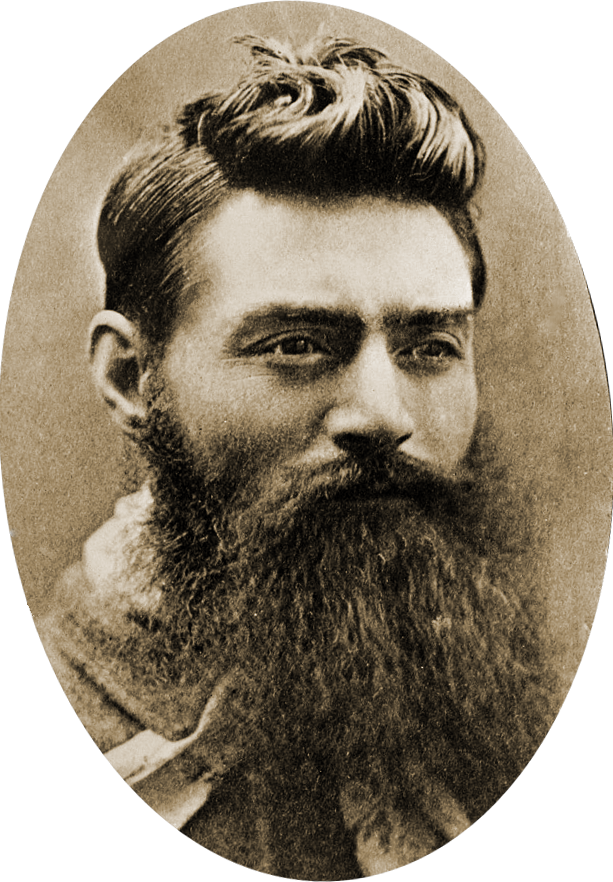 When I had finished my lunch the first one accompanied me back to the road and when we arrived there he asked me with a smile 'Will you be frightened if you see Kelly in the bush?'

'Ha! No!' I answered, 'because I carry nothing of value and I know that this gang concentrates upon bank robberies and the shooting of police constables but leaves wanderers unharmed.'

Whereupon he quickly replied, 'Goddamn you, you're right, the Kellys are not as bloodthirsty as the bloody mob beleive. I am Ned Kelly himself and I tell you that I seek only bloody revenge for damned bloody bloodshed. Goodbye old man.' He then returned to the bush where his brother Dan had already mounted his horse after having extinguished and removed all traces of the fire.

I could not say that having the dreaded Kelly around was very pleasant news and as I rode on I kept looking around involuntarily in all directions. Because a man who could hold entire settlements captive for several days with only three men, after gagging the police and cutting the telegraph wires, is capable of any evil deed. However it was said that the gang only plundered banks (in a most successful fashion) and killed policemen, while ordinary people escaped with threats and scares.

Although the police of both Victoria and New South Wales are chasing the robbers and although the forest is not all that thick, so far no one had been able to track the small gang down. Their hiding place was in the mountains of the Back Range, which I was crossing, and which was wild and rugged country abundant in water.

After several months the news spread that they had disappeared inland or even that they had long left for California. Some rumours even had it that the dreaded Irishman had become a farmer in California and wanted his mother and sister to join him. His sister Kate is well known here for her bravery, and allegedly it is because of her that he pursues a war of revenge against the police. But then suddenly bank officers are tied up again at some bank and the gang takes off with the cash, and although the countryside is immediately encircled and thorough searches are made, there is no trace of the Kellys. Hiding is made easier for the gang by the fact that most tenant farmers and settlers in this area, between Beechworth and Wodonga are Irishmen, who supply the robbers with all necessities and who keep them informed about the moves of the police. Those farmers and settlers who do not support the gang keep quiet just the same for fear of reprisals.

This unexpected adventure had cost me a good hour and what was merely a bad lunch could easily have ended more unpleasantly. 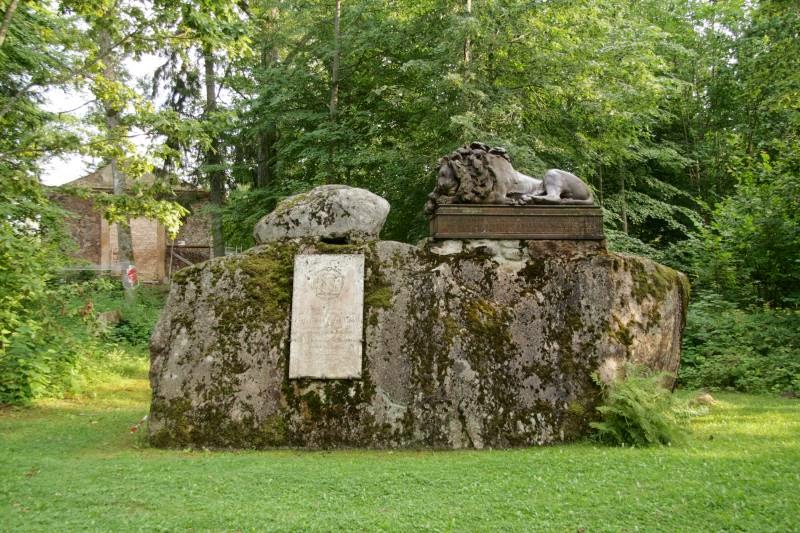 The Anrep-Elmpt family chapel and cemetery now lies in ruins in Estonia.

Count Reinhold Anrep-Elmpt died nine years later in Burma in 1888. He was 54 years old. His former home at Kärstna Manor has since been used as a school and today houses a kindergarten and library.