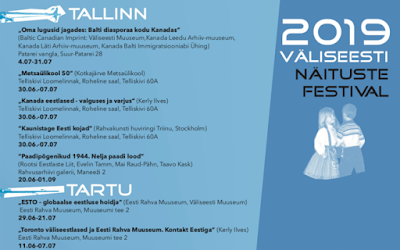 The first of these exhibitions, "Two Edges of a Lifespan," arrived in Estonia from the Museum of Estonians Abroad (VEMU) in Toronto and opened at the Estonian Literary Museum in Tartu on Wednesday.

Memory institutions both in Estonia and abroad have curated a significant number of exhibitions dedicated to various chapters and aspects of Estonian diaspora history. Some of these have already previously been exhibited in Estonia, but several will be making their debut in the homeland this year.

The festival program includes 16 different exhibitions from Estonia, Canada, Australia and the U.S., which in the first stage of the festival this summer will be exhibited in a total of 13 memory institutions in six cities — Tallinn, Tartu, Pärnu, Rakvere, Valga and Võru.

Topics covered by the exhibits range from tales of escape and life in displaced persons (DP) camps to the activities, hobbies and achievements of "väliseesti" communities worldwide. In addition to the stories of World War II-era refugees and their descendants, exhibits will also examine even earlier emigration to Canada and Siberia.

In addition to historical exhibitions, the festival will also include photo exhibits as well as displays of Estonian handicrafts, among other things. One exhibition even focuses on the stories of Baltic people's, including Baltic-Germans', escape from the region and subsequent building of a new home in Canada.

The festival will also feature a few brand new exhibitions as well, including "ESTO — The Global Keeper of Estonianness," a joint VEMU-Estonian National Museum (ERM) project, as well as "Estonian Sports in Canada" at the Estonian Sports and Olympic Museum.

Later this year, the exhibitions will make another circuit around the country, this time at new locations in order to ensure that they reach as many visitors as possible.

Check out the ESTO 2019 homepage for more information.