A. H. Tammsaare's Truth and Justice soon to be released in English

Estonia's most beloved classic novel Tõde ja õigus has been translated into many languages over the years but only once into English. In 2014 Haute Culture Books published a deluxe volume of Tammsaare's Truth and Justice with a limited print run. The translation by Inna Feldbach and Alan Peter Trei has since been acquired by Scotland's Vagabond Voices publishing house and will soon be released in an easily accessible paperback edition. The novel will be released on 14 May 2019 under the title 'Vargamäe: Volume 1 of the Truth and Justice Pentology'. 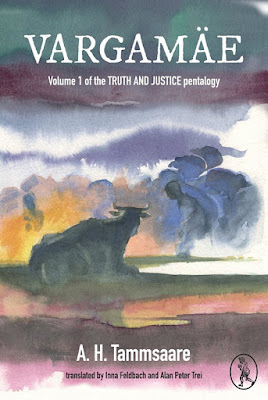 Vargamäe: Volume 1 of the Truth and Justice Pentology has 640 pages and has the following ISBN: 978-1-908251-90-9. It can be purchased directly from the publisher here: Vargamäe