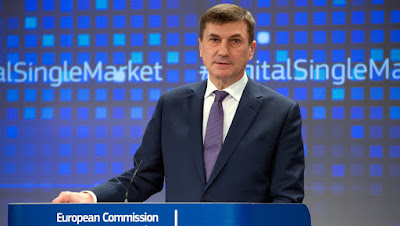 Huge telephone bills ruining your holiday budget, an Internet connection not delivering on its promises: these experiences will be soon old memories. Almost two years after the European Commission put forward its proposal for a telecoms single market, an agreement was found with the European Parliament and the Council. The compromise was reached earlier today following final negotiations between the three institutions (so-called 'trilogue' meetings). It foresees:

The end of roaming charges in June 2017. When travelling in the EU, mobile phone users will pay the same price as at home, with no extra charges.

These measures will be completed by an ambitious overhaul of EU telecoms rules in 2016. This reform will include a more effective EU-level spectrum coordination. Creating the right conditions for digital networks and services to flourish is a key objective of the Commission's plan for a Digital Single Market.

Welcoming the agreement Andrus Ansip, Commission Vice-President for the Digital Single Market, said: "Europeans have been calling and waiting for the end of roaming charges as well as for net neutrality rules. They have been heard. We still have a lot of work ahead of us to create a Digital Single Market. Our plans to make it happen were fully endorsed by Heads of State and Government last week, and we should move faster than ever on this."

Günther H. Oettinger, Commissioner for the Digital Economy and Society, said: "I welcome today's crucial agreement to finally end roaming charges and establish pragmatic net neutrality rules throughout the EU. Both are essential for consumers and businesses in today’s European digital economy and society. We will build on these important foundations in our forthcoming review of the EU's telecoms legislation."

An end to roaming charges in June 2017

For a decade, the Commission has continuously been working to decrease roaming charges within the EU. Prices for roaming calls, SMS and data have fallen by 80% since 2007. Data roaming is now up to 91% cheaper compared to 2007.

Under today's agreement roaming charges will cease to exist in the EU as of 15 June 2017. Consumers will pay the same price for calls, texts and mobile data wherever they are travelling in the EU. Calling a friend when you are at home or in another EU country won't make a difference on your bill.

To abolish roaming charges a series of technical conditions will have to be fulfilled. The EU will get prepared. The Commission is fully committed to implementing those conditions and making sure that the end of roaming charges is operational as of day one.

Already from April 2016, roaming will become even cheaper: operators will only be able to charge a small additional amount to domestic prices up to €0.05 per minute of call made, €0.02 per SMS sent, and €0.05 per MB of data (excl. VAT). This maximum roaming charge is about 75% cheaper than current roaming caps for calls made and data.

Today's agreement also enshrines for the first time the principle of net neutrality into EU law: users will be free to access the content of their choice, they will not be unfairly blocked or slowed down anymore, and paid prioritisation will not be allowed. This means, for example, that the access to a start-up's website will not be unfairly slowed down to make the way for bigger companies. No service will be stuck because it does not pay an additional fee to Internet service providers. There won't be gatekeepers to decide what you can and cannot access.

In the open Internet, all traffic will be treated equally, subject to strict and clearly identified public-interest exceptions, such as network security or combating child pornography, and subject to efficient day-to-day network management by Internet service providers.

In parallel, Internet access providers will still be able to offer specialised services of higher quality, such as Internet TV and new innovative applications, so long as these services are not supplied at the expense of the quality of the open Internet.

The EU will have the strongest and most comprehensive open Internet rules in the world, complete with strong end-user rights to ensure that subscribers get what they pay for. These rules will be a reality across all Member States as soon as the text officially applies on 30 April 2016.

These common EU-wide Internet rules will avoid fragmentation in the single market, creating legal certainty for businesses and making it easier for them to work across borders.
Next steps

Following today's political agreement, the text will have to be formally approved by the European Parliament and the Council. Then it will be translated into all EU languages. After that it will be published in the Official Journal and will officially enter into force.

Theupcomingreview of the 2009 Telecoms Package, which is part of the Digital Single Market Strategy, will address five main challenges:

The Commission will tackle regulatory fragmentation to allow economies of scale for network operators, service providers and consumers, while ensuring equivalent access to essential networks.
Spectrum

Member States receive valuable revenues from the sale of spectrum rights. While these revenues should stay exclusively with the Member States, we need a more harmonised management of radio spectrum at EU level given its vital importance for connectivity.

Updated rules should provide sufficient incentives for market players to invest in high-speed broadband networks and make sure that end-users benefit from competitive, affordable and high-quality connectivity.

The Commission will look into the growing importance of online players that provide similar or equivalent services to traditional communication services.

There is a need to enhance regulatory consistency across Member States. The EU's institutional set-up needs to deliver convergent market outcomes, while taking account of different local and national conditions. In particular on spectrum management, improving coordination among Member States is essential.