Estonia may now be considered one of the least religious countries in the world but its history is rich in religious traditions. For centuries, local parishes were the administrators in Estonian communities, recording and overseeing all vital family occasions including births, baptisms, confirmations, deaths and marriages.  Estonia was historically a predominantly Lutheran country.

The Soviet Occupation changed religious life in Estonia dramatically.  Religion was suppressed and certain activities such as singing hymns in public were forbidden.  The faithful were forced to keep their beliefs secret.

Religious life was suppressed for over 50 years in Estonia but the beautiful churches that still exist today are a reminder of how Christian faith once made up the fabric of Estonian life.  There are many beautiful churches in Estonia to explore.  Tallinn's main five have been beautifully restored for locals and visitors to enjoy. 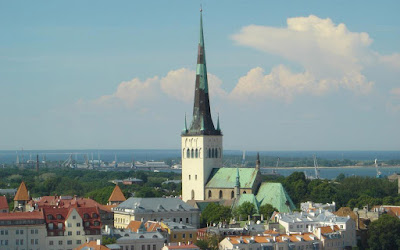 St Olaf' church is Tallinn's biggest medieval structure. It took its name from the sainted Norwegian King Olav II Haraldsson and was once the tallest building in the world. Built during the 12th century St. Olaf became one of the main churches in the Lower Town and formed its own congregation, which at first mostly comprised Scandinavian merchants and craftsmen together with some Estonians. After the reformation in Tallinn in 1523 St. Olaf became a Lutheran church but since 1950 it has been Baptist.

For a few Euros visitors can climb up the church tower and discover a spectacular view of Tallinn. 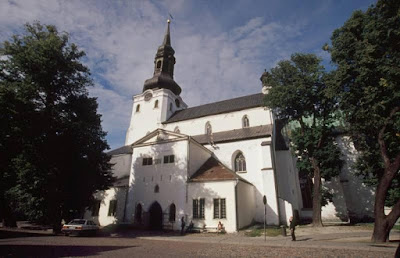 Built around 1219 when the Danes invaded Tallinn, St. Mary's was originally a wooden church that was later rebuilt into a stone structure. St Mary's Cathedral was first mentioned in the year 1233 and is the oldest church in Tallinn and mainland Estonia. It is also the only building in Toompea which survived a 17th-century fire. St. Mary's was originally a Roman Catholic cathedral, it became Lutheran in 1561 and now belongs to the Estonian Evangelical Lutheran Church. 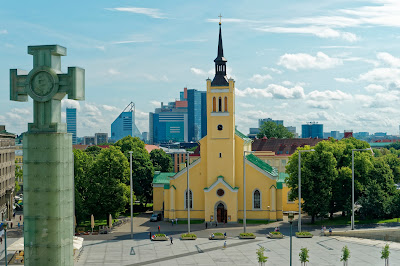 Built between 1862 and 1867, St. John's church is a large Lutheran church that was consecrated on 17 December 1867. The church was built in the neo-Gothic style, with soaring lancet arches, three principal aisles, with a tall tower at the west end topped with a decorative spire. There is a choir and chancel, a small semi-circular apse and a large vestry. The church is built on the eastern edge of Freedom Square and dominates the square architecturally. St. John's church has a rich history in choir singing and today it is still used as a popular concert venue.

Trivia: Johannes Carl Assmuth (1845 - 1916) the former cantor of St. John's is the man behind the winning entry of the very first Estonian Song Festival. In 1869 he convinced his male choir to travel to Tartu to take part in the event. The journey took them four days using borrowed horse wagons but it was well worth the effort as they won! 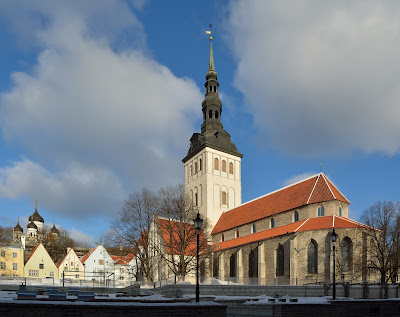 St. Nicholas’ Church was one of the two parish churches in medieval Tallinn and one of the wealthiest churches in town. It was founded and built around 1230–1275 by Westphalian merchants, who came from Gotland in the 13th century. The church was dedicated to Saint Nicholas, the patron of the fishermen and sailors. Saint Nicholas was the only church in Tallinn which remained untouched by iconoclasm brought by the Protestant Reformation in 1523. The head of the congregation poured molten lead into the locks of the church to prevent the raging hordes from getting in.

On the 9th of March 1944, the church was severely damaged by the Soviet Bombing of Tallinn in World War II. The resulting fire turned the church into ruins and destroyed most of its interior (except that of the St. Anthony chapel), including baroque pews, lofts and pulpit. Many precious art treasures survived thanks to their timely evacuation from the church. The renovation of the church started in 1953 and was completely finished in 1981. Fire once again damaged the tower in October 1982. After a restoration was carried out under the guidance of conservator-restorer Villem Raam, the church was inaugurated in 1984 as a museum and concert hall, where the collection of medieval art of the Art Museum of Estonia is displayed.

Trivia: The museum also contains a special silver chamber with the silver treasures of guilds, craft corporations and the Brotherhood of Blackheads 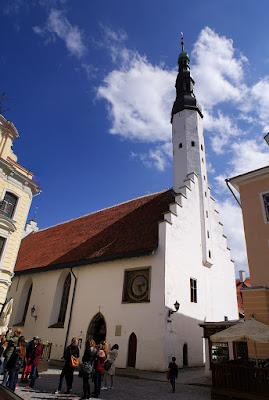 The Church of the Holy Ghost is a medieval Lutheran church that is located in the heart of the Old Town. It is situated behind Raekoja Plats, opposite the Great Guild and Kalev's Maiasmokk Cafe. Construction of the church began sometime during the first half of the 13th century and the church was first mentioned in written sources in 1319.  The fact that the church does not face due east may suggest that it was erected in an already built-up area and had to adapt to the street layout. Originally the church was part of a greater almshouse complex, and dedicated to the Holy Ghost. The Church of the Holy Ghost has a plain, white-washed exterior with crow-stepped gables, an octagonal tower with large Gothic stain glass windows. A major feature of the church is its finely carved clock made by Christian Ackermann. It has been telling the time in Tallinn since the 17th century.

Trivia: The church was the first church in Estonia to hold services in Estonian, and the first extracts of the catechism to be published in Estonian were printed here in 1535. 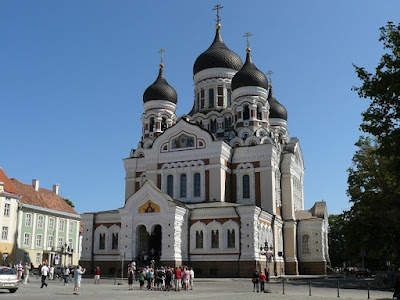 The Alexander Nevsky Cathedral is Tallinn's largest and grandest Orthodox cathedral. It was designed by Mikhail Preobrazhensky and constructed between 1894 - 1900.  The cathedral is dedicated to Saint Alexander Nevsky who in 1242 won the Battle of the Ice on Lake Peipus, in the territorial waters of present-day Estonia. The cathedral is richly decorated and has eleven bells, five onion domes and three altars. It is a popular tourist attraction and is one of the most photographed buildings in Tallinn.

The Alexander Nevsky Cathedral is located on the hill of Toompea which, according to legend is the final resting place of Kalev, father of Estonian folk hero Kalevipoeg.

Trivia: In 1924 there were plans to have the cathedral demolished but the government later changed its mind.