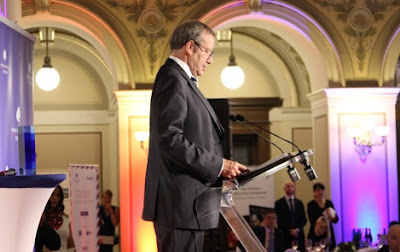 The 2015 Aspen Prague Award has been presented to President Ilves for his outstanding contribution to democracy building and his successful and safe leadership of Estonia as part of a united Europe; the award also acknowledges the Head of State for helping to maintain a strong Atlantic relationship between the countries of Europe and North America and for promoting regional cooperation between the countries of Central and Eastern Europe.

President Ilves gave a speech in Prague yesterday stating - 'Today we see around us a fracturing of Europe, perhaps even liberal democracy more broadly. We are figuratively as well as literally building new walls where instead we should be enjoying the freedom so many European countries fought for so long to achieve'.

To read the full text of his speech, please click here:
https://www.president.ee/en/official-duties/speeches/11666-the-walls-we-build-ourselves/index.html