The Boy and the Butterfly (Poiss ja Liblikas) By A.H.Tammsaare

Since making the wondeful discovery a few weeks ago that I am related to Anton Hansen Tammsaare I have taken a greater interest in his work. If you are like me and grew up in an English speaking country and was never properly taught the mother tongue of your Estonian family, then reading the works of Tammsaare can be quite challenging. Unfortunately, not many of Tammsaare's writings have been translated into English which is a great shame because he was a master of his craft.

Besides the many novels and articles he wrote, Tammsaare also penned a collection of short stories and fables, some of which have been translated into English. For the past week I have been searching online for an English translation for Poiss ja liblikas, the Boy and the Butterfly. It was difficult to find and when I managed to locate it I found it was obviously not translated by a native English speaker, so I took my hand to it and edited it, making it read much smoother.


The Boy and the Butterfly

A host of spring flowers ran riot in a meadow sheltered from the north wind by a forest tract. They waited to be picked - but in vain; and so some of them were shedding their petals already. A bee buzzed by, but no picker was he, nor the butterfly that hovered above them.

The flowers were beginning to lose hope and turned to God in despair. And so God sent them a boy who loved flowers and delighted in picking them.

When the boy came to the meadow the flowers were overjoyed and cried in chorus "Pick me!" "Pick me!" And their heavy fragrance filled the air.

Exhilarated, the boy approached the first flower and stretched out his hand to pick it, when all of a sudden a butterfly rose up in flight - a coloured thread of silk, a gaudy piece of velvet that gleamed like a jewel with a snowflake's deceptive lustre.

It flew a few paces then settled on a flower, spreading out its wings in the sunshine.

"Let me catch you!" shouted the boy, forgetting all about the flowers.

"Go ahead!" the butterfly replied. "Catch me if you can!"

"I promise not to touch you - only let me have a look at close hand."

First catch me  - then do as you please!"

And so the boy did his best to catch the butterfly.

He began by approaching it stealthily; but hardly had he taken a step when the butterfly flitted to another flower, just out of reach, fluttering its pretty wings as it to tease its pursuer.

The boy was getting impatient. Then began an unflagging chase; this way and that, to the north and to the south, a leap to the left, another to the right - over hummocks and bushes. Away he went in zigzag pursuit of the butterfly that one moment was flitting among the low growing flowers and the next was floating up high.

On and on they raced - one on his nimble feet, the other on its silky velvet wings that glittered like jewels in the sun. The fugitive did not tire, nor did the pursuer slacken his pace.

Until at last the butterfly rose higher and higher and flew away far over the forest that sheltered the meadow from the north wind.

Flushed and breathless the boy stopped, and with a beating heart he followed the flight of the butterfly, as if hoping it would turn back. As he stood there, gazing beyond the forest trees, a heavy fragrance was wafted to his nostrils by a passing breeze and he became aware again of the forgotten flowers that were waiting to be picked. Deeply affected by the fragrance, he turned with agitation and was about to stoop down and pick the nearest flower when he stopped in dismay, and his cheeks blanched. He had carelessly trampled over all of the flowers in his mad pursuit of the butterfly.

With a heavy heart, the boy dropped to the ground and cried bitterly, for he loved flowers passionately and would have picked them with pleasure. 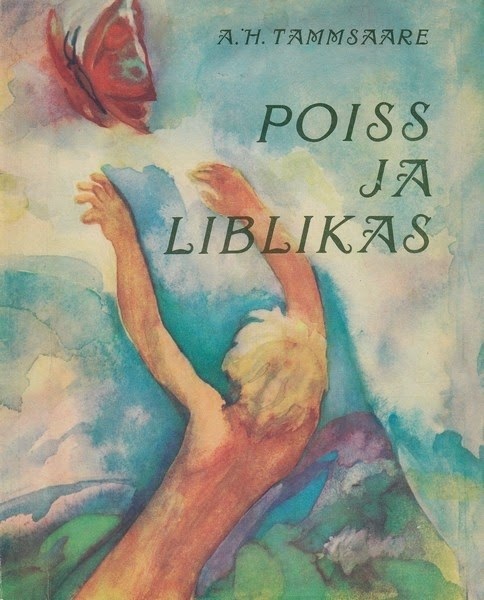 The moral to this fable is to pursue those good things which are within your grasp, and not to get distracted by something that might be captivating but is nevertheless illusory.